It’s been described as satellite GPS for anatomy.

OrthoIndy’s Mazor X Robot Stealth Edition allows doctors to see inside the body during surgery, avoiding nerve tissue through multiple views on a monitor. Prior to surgery, a CT scan is loaded into the software to createsa virtual 3-D model, letting doctors prepare for surgery in advance. 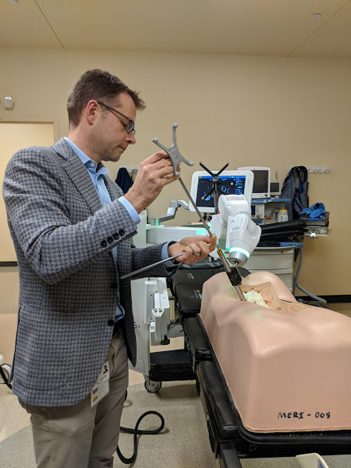 “It allows us to plan out the surgery before we even get to the operating room,” said Dr. Gregory Poulter, a spine surgeon who regularly uses the machine.

Poulter, a Zionsville resident, uses the robotic arm of the Mazor X during surgery but is able to complete most of the mental work even a week beforehand.

Planning ahead helps surgeons anticipate the size of spine implants and the location and size of incisions, which Poulter said can fit under a Band-Aid.

“It’s a game-changer from what we were able to do,” Poulter said.

OrthoIndy is one of only three facilities in the world with the Stealth Edition and is the first not involved in development of the technology. The other two testing sites are in Kentucky and Virginia. OrthoIndy has recently become involved in future technology development and has become a training location for robotics technology.

“This is more than just an interesting piece of medical technology,” Poulter said. “There’s actually a program developing here to really lead the way as far as how robotics are going to unroll in spine surgery.”