You are at:Home»Current in Westfield»Westfield Community»Westfield Middle School student receives new wheelchair after battle with a malignant brain tumor

Westfield Middle School eighth-grader Maddison Polley was the kid who always ran everywhere, until the unthinkable happened when she was 12 years old. 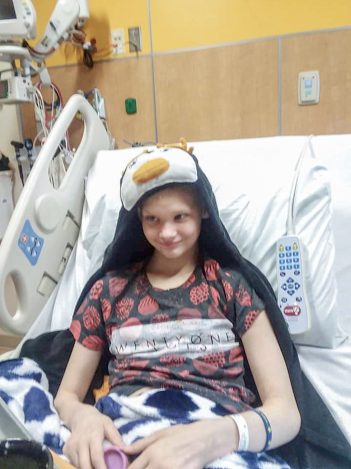 Polley was diagnosed with a medulloblastoma– a cancerous brain tumor which is often aggressive and infiltrates surrounding brain tissue. She had the tangerine-sized tumor removed from the back of her brain in May 2017 and went through several rounds of chemotherapy and radiation.

The intense treatment and extensive surgery robbed her of her ability to walk normally.

Polley’s mother, Melinda McIntyre, said Polley was ready to try out for the school’s track team when she was diagnosed. She said Polley has always been a “very strong and active girl.”

Polley received a new wheelchair Feb. 20. McIntyre said one day they are hopeful her daughter can one day use a walker. The wheelchair was partially funded by the Westfield Lions Club.

“The wheelchair gives her a lot more of independence,” McIntyre said. “I stayed by her bedside for two years, and we are currently living with my parents, so being able to go out into the community and move independently is something you can’t replace.”

As a result of surgery, Polley suffers from posterior fossa syndrome as a result of the surgery, which caused her to lose complete function of her right side. She has since gained her right-side function back but still has a diffiult time moving around, which requires her to use the wheelchair. Posterior fossa syndrome also causes speech disturbances and decreased motor movement.

Polley will be honored at the March 20 Westfield Youth Assistance Program Breakfast.

Westfield Middle School Special Education Teacher Laura Arrington nominated Polley for her perseverance in education and determination to return to school and get caught up with peers following her treatment.

“I really appreciate some acknowledgement being brought to her,” McIntyre said. “She was out of school for two years, so all of her friends moved on to the high school without her. Now, she’s with underclassmen, and that’s hard for her because she is shy.”