You are at:Home»Night & Day»Artist Profile»From fire boots to tap shoes: Carmel firefighter stars in “Singin’ in the Rain”

Carmel firefighter Grant Russel is swapping his fire boots for tap shoes as he plays a starring role in “Singin’ in the Rain,” presented by Indianapolis-based Footlite Musicals. 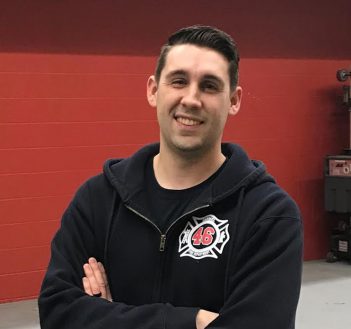 Russel said he has been involved in theater since childhood and said it has been a huge part of his life. He began taking tap dancing lessons at the age 4 and grew up performing in shows throughout his community in Lawrence and in high school. T

Russell, 27, said his time in Boy Scouts paved his career path to his job as a firefighter at Station 46 in Carmel.

“There’s not a whole of people that can tap dance,” he said. “I don’t think anyone has ever heard of a tap-dancing firefighter before.”

Theater runs in Russel’s family. His dad plays the role of Abraham Lincoln at events throughout the Midwest and can also be seen in the CarmelFest parade.

Because of Russel’s schedule, his lead cast mates, Sydney Norwalk and Carmel resident Juddson Updike, who previously performed with Disney Cruise Lines, went to the firehouse to block scenes, rehearse and perform for the other firefighters.

“(Tap dancing) is a little bit different than fighting fire, but I love them both just as much,” he said.

He said he would bring the Broadway soundtrack to “Singin’ in the Rain” to the fire station and practice in the tiled stairwells.

“‘Singin’ in the Rain’ is such a fun, vibrant show and we are so lucky to have (Russel) as part of the cast,” producer Amy Jo Douglas said. “The entire cast, crew, orchestra and staff have worked extremely hard to bring the audience an amazing experience. You truly don’t want to miss it.”

“He has danced his heart out,” she said.

Russel said he plans to celebrate the thrill of the golden age by going swing-dancing with his wife, Lauren, in Fountain Square. Russel and Lauren live in Indianapolis with their two children, Owen and Landon.

For tickets and showtimes, visit footlite.org.