An obscurely shaped, heavy piece of metal that ended up in the street outside Chauncey Bogan’s home was a visual reminder of why he decided to run for Carmel City Council.

The discovery – which he learned was used to identify fire hydrants – was but one of many examples of ways he believes the city has ignored his part of town to focus on building its urban core just blocks away. He said the Mohawk Hills neighborhood, where he lives with his wife, Carolyn, experiences frequent flooding and road damage and that he feels requests to city hall have gone unheard. 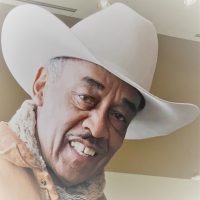 “I talked to approximately 70 percent of people in the neighborhood, and we feel that we’re not receiving adequate city services,” Bogan said.

Bogan will face incumbent Bruce Kimball in the May 7 Republican primary.  The Central District includes the Arts & Design District, Midtown, City Center and some of Carmel’s oldest neighborhoods.

Bogan moved to Indiana in 2013 for his wife’s job. He’s lived in several states but spent more than 25 years in Texas, where he was a small business owner. Now retired, he’s spent 40 years serving the community, which includes receiving presidential appointments under President George H.W. Bush to the National Advisory Council of the Small Business Administration and Houston/Galveston Navigation Safety Advisory Committee.

Since moving to Indiana, Bogan – who typically sports a cowboy hat – has joined the Carmel Chamber of Commerce, Carmel Rotary Club (winning Rookie of the Year in 2014), Carmel Clay Republican Club and has been appointed a precinct committeeman for Mohawk Hills.

His campaign goals are to improve basic infrastructure in neglected areas within the Central District and create better dialogue between residents and city government. He said he noticed the need for better communication when his neighbors turned to him to discuss a solution to the area’s flooding problem.

“Since I am a precinct committeeman, they have chosen to talk to me about it since nothing has been done previously,” he said.

Bogan is the oldest of four siblings from a military family and attended Texas Southern University. He and his wife, Carolyn, have six children and six grandchildren.

For more information, Bogan at BoganforCarmelCityCouncil@gmail.com or call 317-798-8117.