Carmel Symphony Orchestra Music Director Janna Hymes is eager to renew her friendship with violinist Irina Muresanu, on and off the stage.

“We’ve performed together probably 10 times all over the place,” said Hymes, in her second year as CSO conductor. “She is a wonderful musician. We have a very similar style of music-making, so it’s very easy. It’s a great collaboration.” 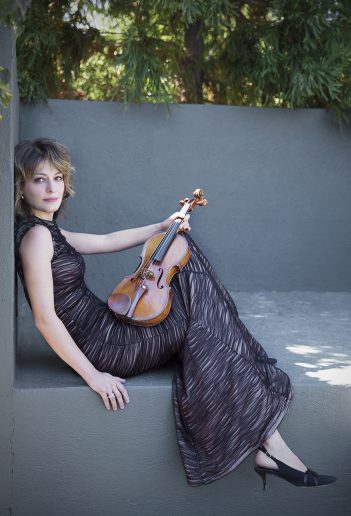 Muresanu will join CSO for the concert at 7:30 p.m. March 9 at the Palladium at the Center for the Performing Arts in Carmel.

Hymes said she doesn’t see Muresanu often because of their busy schedules, but they are still good friends.

“When we do work together and see each other, it’s just a wonderful reunion,” Hymes said. “I’m very excited to introduce her to the Carmel audience. She’s a fantastic musician and a great teacher as well.”

Muresanu is on the faculty of the University of Maryland and has taught at the Boston Conservatory and in the Harvard and MIT music department. She plays a violin that is 170 years old.

There will be three different pieces in the concert, opening with “Overture to Die Fledermaus” by Johann Strauss II.

“I love it because the entire opera in this nine-minute piece you can hear all the characters,” Hymes said. “It’s very fun and has a waltz in it. It’s very exciting and very melodic. It changes mood frequently. It’s a great opening piece.”

Hymes said she expects the performance of Pyotr Ilyich Tchaikovsky’s “Violin Concerto” will be an audience favorite.

“I don’t think I’ve ever performed the first movement with a violinist when the audience just didn’t erupt,” Hymes said. “It’s one of the greatest violin concertos in the repertoire.”

The final piece will be Edward Elgar’s “Enigma Variations.”

“The theme is played by the orchestra, and then there are 14 variations that are based on people that (Elgar) knew,” Hymes said. “Some are musician friends, one is his wife. It’s all different. The idea is interesting. It’s really a beautiful piece. The music of Elgar is so melodic and rich. I think the orchestra has played this piece in the past, so it will be nice for them to have it back in the concert and play with a new conductor.”

Hymes said the concert is much different than the February concert, when there were nine pieces.

“We did a lot of film pieces, so those pieces were short,” Hymes said.

A pre-concert talk is set for 6:30 p.m. For more, visit carmelsymphony.org