Swift is the daughter of late bebop pianist Hod O’Brien and jazz vocalist Stephanie Nakasian. Swift, 24, has been performing since she was 9 years old.

“Of course, it is a great honor to play with Benny Green, a bebop messenger and someone who possesses so much of the lineage at his fingers,” Swift said. “My dad and Benny toured together back in 2007 as part of the ‘100 Gold Fingers Tour,’ and since then I have been a fan of Benny’s. I remember meeting him when I was around 12, and now getting to play with him, it’s like completing the circle “ 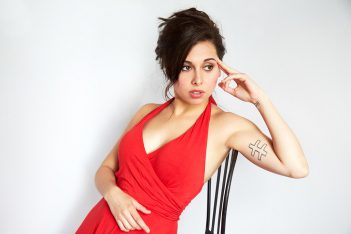 Veronica Swift will bring her jazz and bebop show March 8 to The Tarkington. (Submitted photo)

Swift and the Benny Green Trio will perform at 8 p.m. March 8 at The Tarkington in the Center for the Performing Arts in Carmel. Green, a pianist and composer, has toured and recorded with jazz icons like Art Blakey, Ray Brown, Betty Carter and Freddie Hubbard. Green was a member of Blakey’s Jazz Messengers.

“What Benny and I do, and what I am known for is, of course, doing classics from the Great American Songbook and also bebop lines. Sometimes I sing as a horn, wordless,” Swift said. “But I am also known for taking more obscure jazz tunes not known by popular masses or even modern theater tunes that aren’t in jazz repertoire and making them sound as if they were written in the golden age of song.”

For Swift, jazz is second nature.

“Most people would think that this is a passion, that performing jazz is something I’ve always wanted to do,” Swift said. “This isn’t necessarily wrong, but how I explain it to people is I don’t think anything of it. It’s just what I’ve known all my life. Are you passionate about speaking English? It’s the same principle. You don’t think about it, but when you do, you wouldn’t change your roots for anything, and you’re thankful for what they teach you. My relationship with jazz is, metaphorically and literally, my relationship with my parents. It’s the core and base of my existence.”

As she keeps gaining experience, Swift said she wants to explore even more diverse arrangements and pull from different genres to add to what will become her own sound.

“Even finding songs that come out today and lyrical content that speaks to my generation and mixing it with the sound of Songbook,” she said. “That, to me, is what always keeps this music fresh.”

The concert is part of the Center for the Performing Arts Emerging Artists series, featuring performers who are on the rise or otherwise new to central Indiana.

For tickets, visit thecenterpresents.org. For more on Swift, visit veronicaswift.com.