It’s all about stepping out of your comfort zone with “High School Musical Jr,” the stage adaptation of a Disney film about students Gabriella and Troy who break away from their cliques to follow their passions.

First-time director Julianne Boyd will bring the show to Zionsville West Middle School with a company of 70 students March 8 and 9. The high-energy performance is filled with song and dance and a vibe that connects with youth. 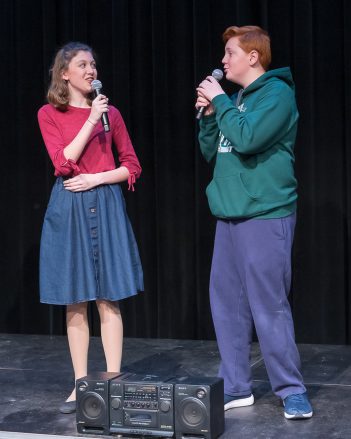 “They can relate to it,” said Boyd, ZWMS choral director who grew up with the movie series. “It helped me connect to musical theater.”

Ben DeBaltzo, who plays Troy, understands his character’s struggle to choose between theater and basketball.

“I love playing sports, but I’m also very involved in acting and drama,” he said. “It’s kind of the best of both worlds.”

DeBaltzo and Jilyane Kistner, who plays Gabriella, appreciate portraying students as opposed to characters in previous shows when they were cast as adults.

“It’s a lot easier to put yourself into their position,” DeBaltzo said.

“I’m interpreting (Gabriella) the way I would act,” Kistner said. “It feels good to get a modern standpoint. That also helps with our acting choices.”

DeBaltzo, an eighth-grader, hopes he can leave his mark on drama club before he graduates.

“I love the community we have here,” he said. “We’re all very welcoming.”

The family friendly show at Zionsville West Middle School is set for 7 p.m. March 8 and 2 and 7 p.m. March 9. Tickets are $5 for students, $8 for adults and $25 per family. They are available in the school auditorium at Door 4.