You are at:Home»Night & Day»Entertainment News»‘Cat in the Hat’ becomes annual affair for Civic cast, director

Matthew Altman relishes his annual appearance in “The Cat in the Hat.”

“I enjoy being with a hilarious group of actors who can put forth focus and fun into this production,” Altman said.

This will be the sixth consecutive year Altman has appeared in Civic Theatre’s production of “The Cat in the Hat” at The Tarkington at the Center for the Performing Arts in Carmel. The fantasy tale follows a talking cat’s visit to the house of two bored children on a rainy afternoon. The production runs from Feb. 26 to March 7. 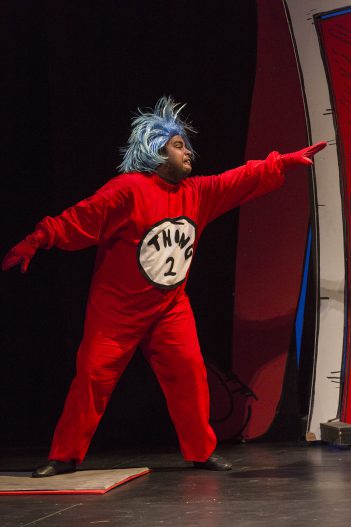 Matthew Altman appears as Thing 2 in “The Cat in the Hat.” (Submitted photo)

“It gives new life and energy every time we do it,” Altman said. “Our director, Anne Beck, has trust in us to give our best and craziest performance, all while honoring Dr. Seuss.”

Altman, a Carmel resident, performs as Kitten and Thing 2.

“Playing to a children’s audience, they give more audible reactions, which give us terrific feedback,” Altman said. “(It) also helps maximize our energy on stage.”

Altman has previously performed in “Joseph and the Amazing Technicolor Dreamcoat” and “Hairspray.”

“I’m very glad to be representing people of color on stage, along with my co-star Jonathan Studdard (Indianapolis resident who plays The Cat),” Altman said. “It’s very important to have children of color see people who look like them represented on a stage. I’m very grateful to Civic for the opportunities and freedom they allow all of us to have to perform.”

“Last year, we had five new to the show,” Beck said. “This year, we only have one new actor to the show. We are thrilled this year to add well-known professional local actor John Vessels to our production.”

Vessels, who plays the Fish, recently performed in “Ruthless! the Musical” for Actors Theatre of Indiana. Beck’s daughter, Nya, also appeared in “Ruthless!”

Beck has directed “The Cat in the Hat” all six years.

“The show is fast-paced and super engaging and fun,” Beck said. “The actors, together with myself, can’t help but keep fun alive as we tell the story. It is always fun to create a little mischief, and each new cast member brings a new and different energy to the group, so they learn to play in fresh ways.”

Beck said she looks forward to the show each week.

“Knowing how kids react and their audible giggles still tickles me six years later anticipating how this show affects them. They love it,” she said.

Civic Theatre will celebrate Dr. Seuss’ birthday from 11 a.m. to 1 p.m. March 2. Admission to the party comes with the purchase of a ticket to that day’s performances, 10 a.m. and 2 p.m. Businesses and service providers will be on hand with birthday cake, family activities, games, treats and prizes. Some of the groups participating are Peyton Manning Children’s Hospital, Best Buddies and The Ice at Center Green.

The 2 p.m. performance that day will be inclusive, with accommodations for sensory sensitivities, mobility issues and other special needs. The adaptations include keeping the house lights up, adjusting overwhelming sound effects, adjusting house rules to allow for talking and moving, additional seating options for those with mobility device, and an American Sign Language interpreter upon request.