British clarinetist Julian Bliss was trained in classical music and never envisioned being part of a jazz septet.

“Since I was never taught jazz, I thought it was so far removed from classical stuff, so I didn’t consider it as a possibility as a kid growing up,” Bliss said. “It wasn’t until I was putting together an idea for a CD that I thought this is possible, and why can’t I play jazz and classical alongside each other? There is no reason why not, so that’s when I decided to start the band,”

The Julian Bliss Septet will perform “A Tribute to Benny Goodman” at 8 p.m. Feb. 23 at the Palladium in Carmel. Goodman, known as the “King of Swing,” was a clarinetist and band leader. 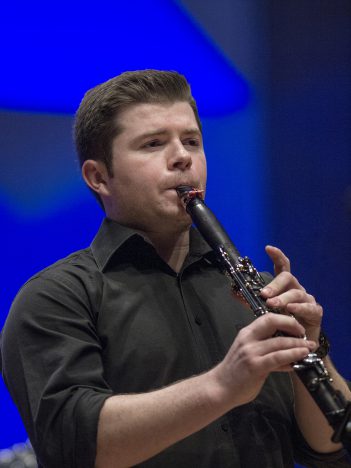 Julian Bliss will perform with septet at the Palladium Feb. 23. (Submitted photo)

“The band was established in 2010, and the first project we did was a tribute to Benny Goodman,” Bliss said. “For a clarinetist, it was quite a natural way to start, but no means an easy place. We toured extensively in the UK and all over Europe. The last four years we’ve been coming to the USA and playing at a variety of places. We have a secondary show now based on Gershwin, but the Benny Goodman show is one we’ve done quite a number of times.”

A jazz septet is a formation of seven musicians. Bliss said the tribute constantly evolves.

“We’re adding and changing things,” Bliss said. “With jazz, no two performances are the same. Even though we have done it for a number of years, it always takes on a new identity in every single performance we do.”

Bliss plays a variety of tunes from the era.

Bliss said when he put the band together, he realized he had to include a vibraphone.

“First of all, it’s an amazing instrument,” Bliss said. “When it’s played to a high standard, it’s quite a spectacle. It’s a very unique sound and bells with the clarinet quite well. Back in Benny Goodman’s day, he played a lot with Lionel Hampton, and it created a very unique sound. The other benefit of the vibes is it can play chords and provide harmony and a lot of structure, especially when you are creating the big-band sounds, so a vibraphone alongside a piano, you can have quite a lot of voices. It offers a nice contrast with the clarinet, so that’s the idea behind the instrumentation.”

Bliss started playing the clarinet at age 4. A child prodigy who studied at Indiana University at age 12, he works with Conn-Selmer, a musical instruments manufacturer based in Elkhart.

“I spend a decent amount of time in Indiana these days,” Bliss said.