You are at:Home»Current in Carmel»Carmel Community»Carmel sophomore finds success trading basketball for bowling

Casey Saas decided to trade in a basketball for a bowling ball this school year.

“I like how you are on your own and if you are messing up, you know how to fix it,” she said. “It’s more of a mental sport. I quit basketball to do bowling full time. I’m doing lacrosse, too, but bowling is No. 1.” 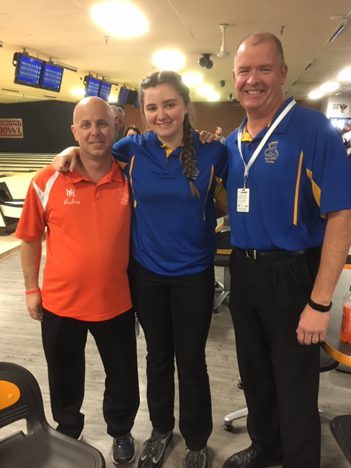 The Carmel High School sophomore competed on the boys bowling team in league competition because there is not a girls team at the school.

“I like competing with the boys because there is higher competition there,” Saas said.

It helps her in the Northwest Indiana Junior Tournament Players Association tournaments that she competes in once a month.

Saas rolled a 614 series to be the top qualifier in the girls individual competition Jan. 26 at the Indiana High School Bowling’s Richmond Semistate. She then placed second, losing in the stepladder finals. She finished 16th individually in the state finals Feb. 2 at Anderson.

“I hope I get to state again next year and do as well as I can there again,” Saas said.

She was named honorable mention All-State and will compete in the Bob Rohrman Subaru All-State Scholarship Tournament March 2 at Pro Bowl West in Fort Wayne.

Saas said she definitely made improvement during the 2018-19 season.

“I fixed my release at the end of the swing,” Saas said. “When I do it correctly, it’s a lot better than it was before, so I’m staying underneath the ball.”

“Her freshman year she did bowling and basketball, which is a huge conflict, so she missed quite a bit of the season,” CHS bowling coach Mike Oehler said. “Even when she was playing basketball, she was spending time at (her bowling) game.”

Oehler suggested she work with Jimmy Trexler, whose daughter, Keagan Trexler from Hamilton Heights, was the 2018 state singles champion and state runner-up this year.

Oehler said his goal for Saas next season is to at least make second team All-State, if not first team.

Saas averaged around 170 during the regular season, Oehler said. However, her average was approximately 178 during the four rounds of the state tournament.