You are at:Home»Current in Noblesville»Noblesville Community»Shanehsaz seeking at-large council seat

Rocky Shanehsaz has filed his candidacy in the May primary election, seeking an at-large seat on the Noblesville Common Council. 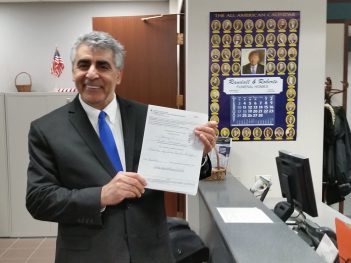 Shanehsaz is a local real estate developer and owner of The Mill Top Banquet and Conference Center in downtown Noblesville.

In his announcement, Shanehsaz said he plans to focus on economic development and transparency.

“Many international companies are eyeing our community for their headquarters,” he said. “Attracting global industries to invest in Noblesville, rather than moving here to take advantage of tax breaks or free handouts, will create new opportunities for growth. Often, the economic impact of a wonderful project fails to get quantitatively communicated to the public, and a lack of understanding leads to a lack of support, which leads to the delay or abandonment of the project.”

Shanehsaz moved to the U.S. more than 40 years ago, becoming a citizen as a teenager. He has lived in Noblesville since 1990. He is married to Terri and has two children, Abe and Ava.