If you need a dose of convincing to try the “Almost, Maine” dramady arriving at the Mud Creek Theatre on East 86th Street from Feb. 15 to March 2, it is highly recommended you visit the play’s website (almostmaine.com).

There will be no turning back at that junction. The website offers a sweeping endorsement and shows there is nothing “almost” or “nearly” about this 95-minute performance scripted by actor and playwright John Cariani of “Law & Order” fame.

Indeed, this February special at Mud Creek provides a series of sizzling love and romantic episodes in which a variety of figures fall in and out of love in unique and strange ways. The actors, four souls who play multiple characters in the nine acts, bounce from one setting to another, using romance as a common thread in their stories. 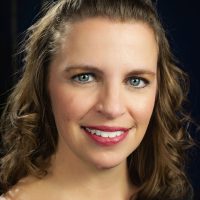 “It is an amazing roller coaster of emotions,” said Noblesville resident Andrea Odle, the first-time director of the Mud Creek version. “You may cry, or you may have a belly chuckle. Your emotions will be all over the place.”

And those shifts from laughter to tears perhaps played a role in soliciting the positive responses from critics from across the nation who assessed “Almost, Maine.”

Since its premier in Portland, Maine in 2004, “Almost, Maine” has been produced in 4,000 theaters in the U.S. and has been staged in Mexico, Italy, Estonia, Israel and Belgium. American high schools also have presented the play.

Odle, who has acted at Mud Creek for more than 20 years, discovered the play a few seasons ago when Mud Creek alum Gary Cohen exposed her to the play.

“It has been in the back of my mind,” Odle said. “It kept popping up as something we should do.”

“You can go all over the world with it,” she said. “You can have a huge cast or a small cast.”

Odle chose the small cast route, selecting her husband, Mason Odle, and daughter, Lexi Odle, along with Kyrsten Lyster, Matt Hartzburg and Jennifer Poynter, to play 19 different roles. Lyster and Hartzburg will be making their initial appearances at Mud Creek.

Meanwhile, the Odles have clicked in rehearsals.

“Mason’s not scared to put himself out there,” Andrea said.

But there are more than two Odles in “Almost, Maine.” Lexi pops up on stage, while daughters Kenzie and Rylee assist mom with stage preparations.

“It helps having everyone there,” Andrea said. “When I go home at night, they understand what I have been through.”