Comedian Alex Clark has been pleased with the response to headlining a national tour for the first time.

“At the end, everyone is like, ‘I thought I was going to have to drag my kids to this thing and be miserable for an hour,’ but I think I liked it more than they did, and they liked it,” Clark said. 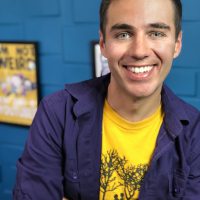 “It was all new material and it worked great, and now we’re just refining it,” Clark said. “By the time we get to (Fishers), it will just be killer.”

The Los Angeles comic said his performance will include improv, stand-up and stories about his ridiculous family.

The YouTube channel started to promote his comedy shows, which weren’t well-attended at the time. “It’s Alex Clark” has nearly 4 million YouTube subscribers, which features his animated characters.

“Ten years ago, I started posting cartoons and they picked up a little bit of steam,” Clark said. “This was the dream, to do this.”

“But this is the first time people are coming to see Alex,” he said.

Nationally touring comedian Sam Malcolm will open for Clark on the tour.

“I got into art because of the movie ‘Aladdin,’” Clark said. “I watched it again and thought maybe I don’t like the art, maybe I like Robin Williams’ performance.’ I got super into comedy from middle school to after graduating college. Once I posted one or two cartoons, people seemed to like it.”

Clark now has employees to help with the animation.