You are at:Home»Current in Carmel»Carmel Community»Allan’s play gets public reading

The Carmel Clay Public Library came in handy when Marc Allan was seeking to write.

“I’d go every Sunday and spend two or three hours locking myself in a study room,” the Carmel resident said. “There was no TV, there was no refrigerator, there were no distractions there.” 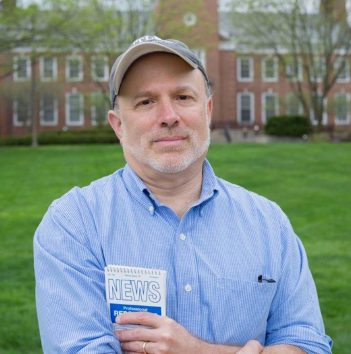 Allan was working on his Butler master’s degree in fine arts in creative writing, which he completed in May 2018. It was there that the Butler news manager and adjunct journalism professor wrote his first play.

A free public reading of “A Little Happiness” will be at 7 p.m. Feb. 18 at the Eidson-Duckwall Recital Hall on Butler’s campus.

“It’s about three people who meet in a bar and change each other’s lives,” Allan said. “For me, it’s an opportunity to hear the words spoken and the story makes sense.”

This is the second reading. The first was at Butler about a year ago but wasn’t open to the public.

“The first time they read it, I ended up cutting about eight pages out of it,” he said.

Even though the former newspaper reporter said he liked those pages, he said the play was too long and those pages didn’t add anything to the story.

“It sounds a lot different coming from their mouth than it does coming from my brain when reading it myself,” Allan said.

“I would love for it to one day be produced as a play. I was just thrilled Diane Timmerman, chair of the theater department, wanted to do the reading. I had told her about the play a couple of years ago.”

Allan posted the script on the National New Play Network.

“I’m in the process of trying to publish (the novel),” Allan said.