Larry Ingraham grew up in Michigan, but for the last 35 years his heart has been in Indiana and Japan.

The Carmel resident has devoted his career to promoting Indiana in Japan (and vice versa), and in November 2018, Japanese Emporer Akihito selected Ingraham as a recipient of the Order of the Rising Sun, one of the top honors awarded by the Japanese government. Ingraham officially received the honor Jan. 29 during a ceremony at the Skyline Club in downtown Indianapolis.

“It’s something I never expected to receive,” said Ingraham, who founded the consulting firm Ingraham & Associates in 1990 after working for the state of Indiana for several years. “Working alone, heading up my own company all of these years, it’s been very easy to feel unappreciated and out of the limelight from time to time. To receive this recognition from the Japanese government is just wonderful.”

The Japanese emperor will abdicate at the end of April, which places Ingraham among the final group to receive the Order of the Rising Sun from him.

“Over those 30 years (Akihito has been emporer) is exactly when Larry made a great contribution to Japan and Indiana relations,” said Naoki Ito, consul-general of Japan in the Consulate-General of Japan in Chicago. “I think this is really significant that Larry is being honored by the Japanese emperor among the last batch.”

Ingraham, 69, has spent time in Japan as a member of the U.S. military, on business and for pleasure. No matter his reason for visiting, his goal is the same.

“People ask me what I do, and I say, ‘I’m a carpenter.’ I’ve been building bridges between Indiana and Japan all of these years, trying to make sure both sides understand the other,” he said. 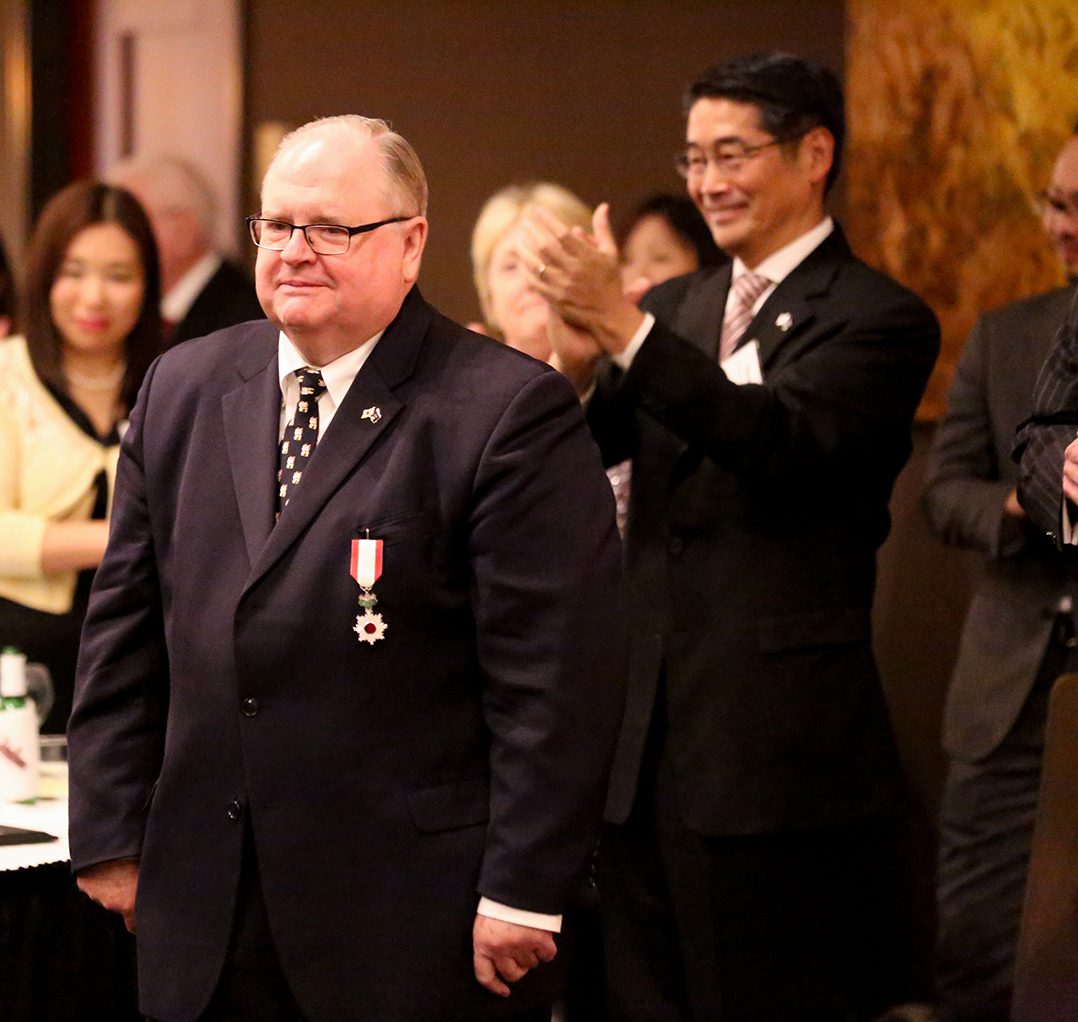 Guests applaud Larry Ingraham at a Jan. 29 ceremony where he received the Order of the Rising Sun. (Photo by Ann Marie Shambaugh)

Tragedy struck early for Ingraham, an only child raised by his aunt and uncle in Adrian, Mich., after his parents died young.

He enlisted in the U.S. Air Force to avoid being drafted, hoping that it would give him greater control over his fate. The teen who had only traveled outside Michigan once became a dental technician in the military and spent 15 months in Taiwan before getting his first taste of Japan, where he was stationed for two years.

“The military was the biggest culture shock. I had led a sheltered life in Adrian, Mich., and then I got thrown into the melting pot of the Air Force. That was probably my greatest education,” he said. “Then they sent me overseas, and that was another great education. Fortunately for me, my DNA was such that I enjoyed foreign cultures. There were a lot of guys who were the opposite.”

After he completed his military service, Ingraham returned home to attend college, earning a degree in Asian Studies from the University of Michigan. But soon he was back in Japan, working first as an English teacher and then at a consulting firm.

He was planning to return to the U.S. to get his MBA when he saw a notice in an English-language newspaper in 1982 that a U.S. state was seeking a director for its office in Japan. He applied, assuming the unnamed state was on the West Coast.

“About a week later, to my surprise, I got a letter in the mail that had a big, red Indiana stamped on the upper left-hand corner,” he said. “I thought, ‘Well, at least I’ve driven through Indiana growing up in southern Michigan.’”

Ingraham got the job and quickly learned from his bosses – Gov. Robert Orr and Lt. Gov. John Mutz – that his duties included helping to pull Indiana out of the recession of the late ‘70s and early ‘80s.

“The first time I met them, they sat me down and said, ‘We have to give hope to Indiana communities. We think Japanese companies are going to come to us. Let’s work together and bring them here,’” Ingraham said.

At the time, 18 Japanese companies had set up shop in Indiana. Three decades later, that number has risen to more than 300, and Ingraham is credited with much of that success. Japanese companies in Indiana employ more than 65,000 Hoosiers, and Indiana receives the most Japanese investment per capita of any state in the nation.

Alan Kimbell, former deputy director of the Indiana Dept. of Commerce, said at the Jan. 29 ceremony that the decision to hire Ingraham as director of the state’s Japan office was “obvious and easy.”

“The best thing I did for Indiana was to hire Larry,” Kimbell said.

Ito said Ingraham is so successful in part because of his ability to make Hoosier and Japanese clients feel at ease.

“His charm and wit make him instant friends with everyone,” Ito said. “His Japanese-like approach and Hoosier warmth are so persuasive and effective. “ 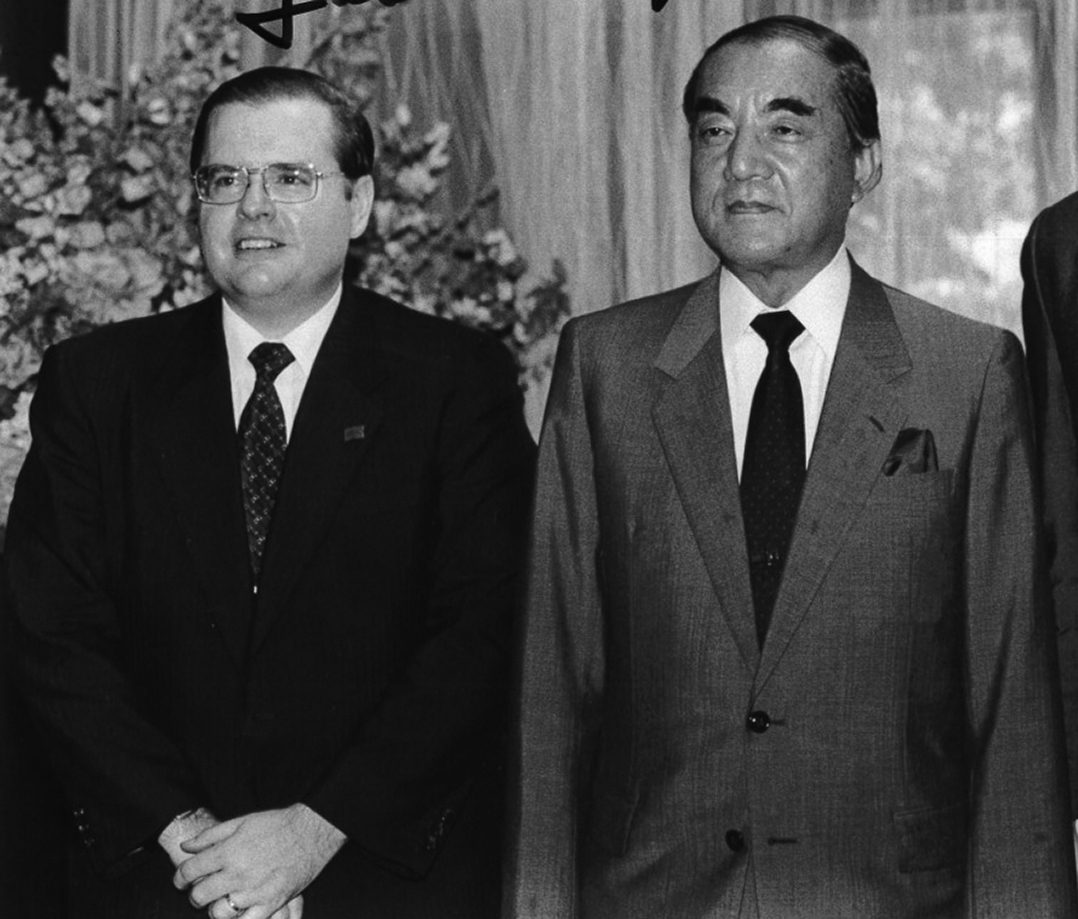 Ingraham served as director of the East Asian Office of the Indiana Dept. of Commerce from 1983 to 1986, a period that led to the openings of Subaru-Isuzu Automotive in Lafayette, Enkei in Columbus and Alpine Electronics in Greenwood, among others. But he said his greatest professional accomplishment wasn’t anything he did, but rather something he prevented.

In the spring of 1984, Ingraham noticed that a Japanese news article listed Indiana as one of a handful of states that had allowed taxation of state and worldwide earnings, a fact that came as a surprise to Ingraham and other Indiana leaders. After doing some research, Ingraham learned that Indiana law allowed the tax to be charged, although it never had been. He worked with Indiana legislators to quickly eliminate the possibility of the tax going into effect and got to work spreading the news among Japanese investors.

“It’s so important that Indiana had an office in Japan. If there hadn’t been an Indiana office and director, we might never have known about this and Indiana might never have been able to take action,” he said. “We might have been silently excluded (from investment opportunities) without our knowing it.”

With the business ties growing stronger between Indiana and Japan, Ingraham and his wife, Shizuko, moved to the U.S. to raise their two daughters, Helen and Ann. Although they had never lived in the Hoosier state, there was no question where they’d settle.

“I had sold Indiana so long I was sold on it,” Ingraham said.