You are at:Home»Current in Carmel»Carmel Community»Longtime Carmel dentist retires, daughter takes over practice

The retiring Marks is turning over the practice to his business partner, who also happens to be his daughter, Dr. Emily Murray. 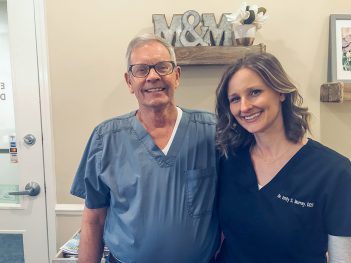 “I know she’s good already and she cares,” Marks said.

Marks said his daughter always worked in the office growing up, so she knew the longtime staff members well.

“It’s been a very easy transition for her,” Marks said.

Marks, 69, has lived in Carmel since 1976. He opened his practice that same year at 96th Street and Keystone Parkway. The practice moved to 3003 E. 98th St. several years ago.

“We’ve been transitioning for about a year and a half,” Marks said. “For about a half a year, we were both here every day. Then it got to point where both or only one of us might be here.”

Marks said he has been filling in on an as-needed basis.

Murray and her husband, Phillip, have four children, Emma Jane, 4 , Connor, 3, Caroline, 1, and Cameron, three months.  Marks and his wife, Suzanne, look after their grandchildren during the week.

“We get to enjoy (Murray) and her children as long as we’re physically able, and their house is about 2 miles from us,” Marks said. “My wife and I play a lot of golf.”

Marks and Suzanne have a son, Aaron, a 2000 Carmel High School graduate, who is a golf pro in Virginia. Aaron has two children, Landon and Brody.

“I’ll miss the daily interaction with the staff and patients,” Marks said.

Murray, a 2003 CHS graduate, played softball at the University of Kentucky. She originally was going to pursue a career in counseling and was an assistant principal in an inner-city Cincinnati school, but decided after two years it would be too frustrating to do that for a career, so she decided to try dentistry.

“I realize my parents were right and this was the perfect fit for me,” Murray said. “Thankfully, I have a very supportive husband who let me go back to school and supported me through that.”

Murray said she hears a lot that she and her father have the same approach with patients.

“Which makes sense, as I’ve watched him since I was 12, working odd jobs,” she said.