You are at:Home»Current in Carmel»Carmel Community»Sertoma Club honors Carmel’s Melangton for commitment to serving others

After all, the Carmel resident was named a Living Legend by the Indiana Historical Society. 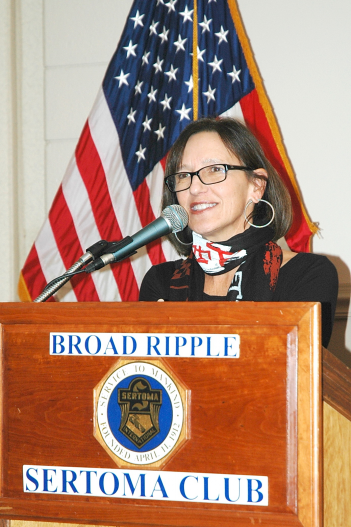 Melangton’s calendar is jam packed because she serves on a slew of boards of directors at once.

Melangton’s involvement has earned her other honors, including the Sagamore of the Wabash, the Jefferson Award for Community Impact and Lifetime Achievement from College Mentors for Kids.  Melangton added another prestigious honor this month when she received the Sertoma Club of Broad Ripple Service to Mankind Award at a luncheon.

“It’s absolutely an honor. It’s a great organization,” Melangton said. “It’s even more of a special blessing to be honored by a group I feel does great things in the service for others. It’s a group of thoughtful individuals involved in the community in their lives and careers.”

Melangton has been to the Sertoma Club several times during the last decade to discuss service projects and ways to help the community.

Since 2014, Melangton has been senior vice president of events for Hulman Motorsports.  She is responsible for overall production of major events and strategic planning at the Indianapolis Motor Speedway, including the Indy 500. She previously was Indiana Sports Corp. president for two years and CEO and president of the 2012 Indianapolis Super Bowl Host Committee.

Melangton also has worked as an associate producer for NBC Sports for its gymnastics broadcasts since 1996.

Among the many boards of directors Melangton serves on are the St. Vincent Foundation; Public Safety Foundation; Indy Chamber; Economic Club; 500 Festival; Indianapolis NBA 2021 All-Star Game; and OneAmerica. Melangton is chairing the capital campaign for the Wheeler Mission Women’s and Children’s Center expansion.

Melangton, from Auburn, Maine, has lived in the same Carmel house with her husband, Tom, for 32 years. They have a son, Tom, 25, a 2012 Carmel High School graduate.

Broad Ripple resident Bill Willen was named Sertoman of the Year.  He joined Sertoma in 2011 and has served as the club’s president and board chairman.