A pain-free therapy is now available for podiatry patients at Westfield Foot and Ankle.

Dr. David Sullivan recently began offering MLS Laser Therapy with an MPHI 5 Dual Wave Class Four Laser, a Multi-wave Locked System that uses specific wavelengths of light to treat painful or debilitating conditions. He is the only podiatrist in Hamilton and Boone counties to offer the therapy.

Sullivan said he other area practices likely don’t offer it yet because the technology is relatively new and costs $48,000 to purchase.

“We got it because we were looking for alternate forms of treatment for patients to help them reduce pain for multiple issues,” Sullivan said. “It’s also indicated for post-operative pain after surgery. I like to think of it as another tool in our toolbox we can use to keep people from having to get surgery in the first place.”

Because not all podiatry treatments have a 100 percent success rate, Sullivan said he and his team always look for different forms of treatment modalities.

The therapy is applied with a class-four laser which can be used on any body part except eyes. It’s painless and can prevent patients from needing more painful treatment options like steroid injections or surgery. It has shown to decrease healing time 30 to 40 percent.

“The thing that sets this laser apart is there are two laser-light waves,” Sullivan said. “So, energy is basically speeding up the metabolism of the cells in the area where there’s pain and causing a healing effect in that area. The other wavelength coming at that area hits the pain receptors, so it kind of fools the pain receptors, so to speak, to reduce the pain immediately.”

Most commonly, Sullivan treats patients for plantar fasciitis. The therapy also has been used for neuromas, arthritis or tendonitis. Because the treatment is offered at Westfield Foot and Ankle, Sullivan has treated eight patients with it.

The treatment made a remarkable difference for Indianapolis resident Abby Diaz. A decade ago, her Zimbabwean dancing caused plantar fasciitis. After years of no treatment, Diaz, a middle school  teacher, ranked her average pain as 5 to 7 on a scale of 1 10 10. There was never relief from the pain.

“In the morning, I could not walk. I would actually have to roll down to the floor and do some stretches first before I could even walk,” she said. “I’m constantly on my feet, so that just added to the constant pain. I tried everything. I had done custom orthotics, I did physical therapy and had my stretches. I even had a personal trainer to help me to keep me on things, and I still was in pain at least a 5.”

Because of the pain, Diaz was unable to dance. After six sessions of MLS Laser Therapy, Diaz said her pain is down to a 3 and has has days with no pain at all. She has been cleared to dance but hasn’t yet resumed.

The suggested amount of therapy is six sessions, but Diaz noticed an immediate difference after the first treatment.

Even with the therapy, Sullivan said patients are encouraged to still do their stretches, wear orthotics, ice or complete any other treatments he’s prescribed. 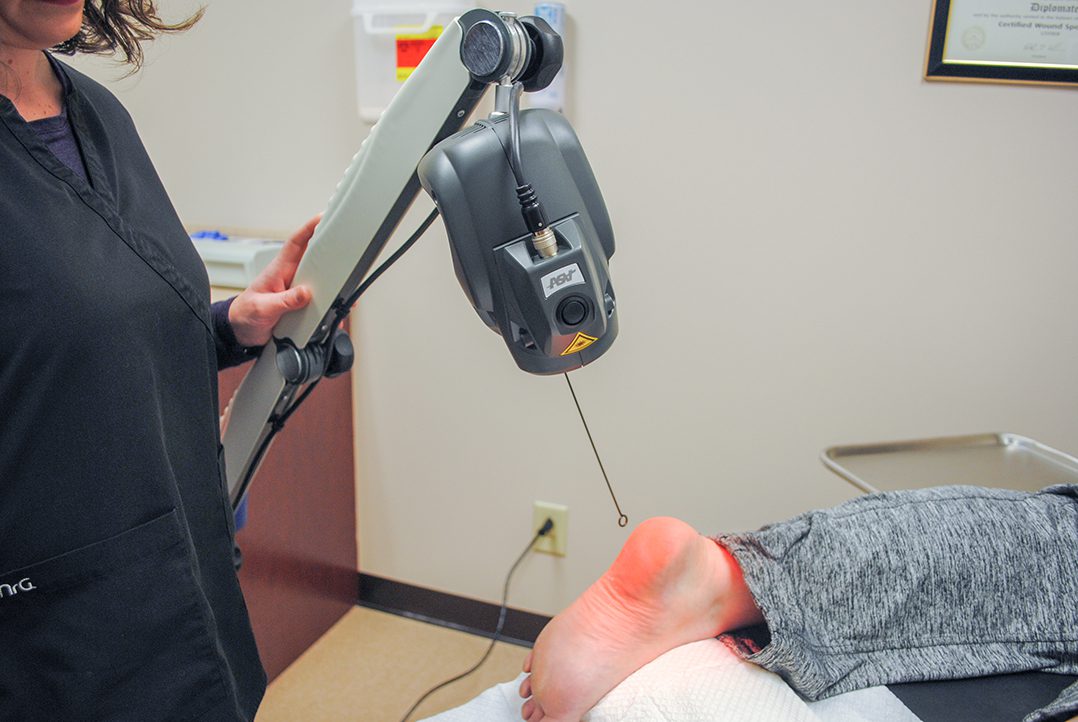 MLS Laser Therapy is painless and can help reduce pain and healing times for conditions like plantar fasciitis, arthritis, neuromas or tendonitis. (Photo by Anna Skinner)

What a session of MLS Laser Therapy looks like

Medical assistant and Laser Safety Officer Holly Obergfell said each MLS Laser Therapy session takes between four to 10 minutes, depending on what she is treating.

“Patients don’t feel the laser,” she said. “There are no side effects. After I’m done doing the therapy, definitely if they have a certain pinpoint spot of pain, if I do the laser and touch it afterwards, it’s immediate improvement afterwards.”

Insurance does not cover the cost of MLS Laser Therapy. Patients can expect to pay $450 for the six sessions.