Anthony Johnson and Laura Kuhn found the perfect vehicle to perform together.

“We’ve talked a long time about doing a show we act opposite each other,” Johnson said. “I’m considerably older than she is, so finding the right piece that allowed us to do that was not easy.” 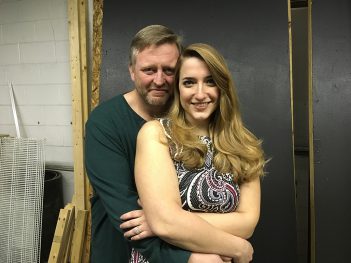 Anthony Johnson and Laura Kuhn star in “2 Across” at The Cat. (Photo by Mark Ambrogi)

The friends will perform and serve as co-directors in Amalgamated Stage Productions’ running of “2 Across,” a two-person play set for six performances from Jan. 24 to Feb. 3 at The Cat Theatre, 254 Veterans Way, Carmel.

“She gets to play a little older than she actually is, and I get to play a little younger than I am, but it’s just believable enough that two strangers on a train might meet and have a romantic hour-and-a-half,” Johnson said.

The only other character is the recorded voice of the train conductor announcing the stops.

“They are random train riders on an early Saturday morning with no one around,” Johnson said. “On their last stop back on the BART, Bay Area Rapid Transit, they strike up a bond over crosswords, life, jobs and family. They have a romantic few moments and make a plan to meet later or possibly not meet later. We don’t know if they are ever going to get together or not.”

Kuhn said the project has been a lot of fun.

“Everything we’ve done together has been with a large cast,” Johnson said. “This has given us a chance to really dig into our characters and do some very good acting. I think we work well together artistically.”

In the middle of December 2018, they decided to do the play because the other play they were going to co-direct could not go on because they couldn’t find the right casting mix for those dates.

“We found this script and we said to (The Cat owner) Willie (Wood), ‘If you want to fill that hole in your calendar, we have a show we’d love to do together,’” Johnson said. “Laura has directed me, and she’s been my assistant director. We’ve done all kind of things together, a lot of Shakespeare, but we’ve never acted together.”