You are at:Home»Current in Fishers»Fishers Community»Books and Brews artist recognized by New York Times

Books and Brews was recently featured in a New York Times piece for its unique business concept of being part bookstore, part brewery. Longtime Books and Brews fan Chris Hayes got an uncredited nod in the Jan. 5 article, which included a photo of the beer tap handles Hayes creates for each Books and Brews store. 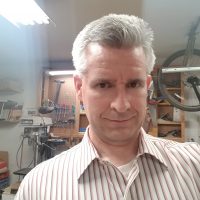 “Back when the first location was coming about, I was asked by Jason Wuerfel, founder and president of Books and Brews, to help him with a few things,” said Hayes, a Fishers resident. “I noticed he was pretty much building everything inside himself, so I helped him with a project, and then he asked me if I could make him some tap handles for the beer.”

Wuerfel gave Hayes some direction as to what he wanted. Each tap handle looks like the spine of an actual book. Hayes removes the spines of books and affixes plywood to look like pages.

“In the beginning, I tried to match the book name to the beer,” Hayes said. “Now that there are several locations and I make the handles for those as well, I just can’t do that anymore.”

Hayes said woodworking is a hobby that pays for itself. He also sells handmade wooden housewares and buttons. He’s happy to help Wuerfel with the tap handles.

“It’s exciting to make this stuff,” Hayes said. “When Jason says he needs something, I’m all for it. I would bend over backwards to make him happy.”

Hayes is delighted to be recognized for his work, but he is just as excited to see Books and Brews getting the recognition he feels it deserves.

“You know, it really is cool, but I’m happier for Jason,” Hayes said. “I really am because the New York Times pointed out something that I really think is totally unique.”