At 18, Ashton Gleckman didn’t graduate from high school and hasn’t learned to drive.

Yet, he just landed a job with his composing role model. 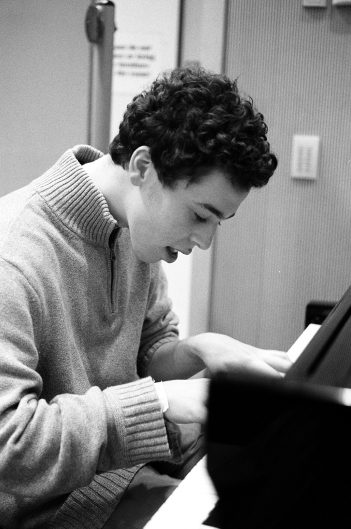 Gleckman left Carmel High School after his sophomore year in May of 2017.

“I didn’t get a GED or anything. I just went after my passion for music and spent full-time studying,” Gleckman said. “I started scoring short films and did a few documentaries. I just focused all the time I would have been spending on school and focused on my craft.”

Gleckman’s father, Ari Gleckman, said his son will start at $48,000 per year.

“Not bad for a college dropout,” his father joked.

Gleckman interned for Zimmer’s film scoring company, Remote Control Productions, in July 2017 in Los Angeles. Zimmer has composed for more than 150 films, including the Academy Award- winning score for “The Lion King,” “The Dark Knight” trilogy, “Gladiator” and “The Pirates of the Caribbean” series.

Gleckman didn’t meet Zimmer until after his internship. Gleckman drew Zimmer’s attention when he saw Gleckman’s YouTube series, “Behind the Score,” in which he examines and reconstructs film scores. Gleckman further attracted Zimmer’s attention following the release of an episode exploring Christopher Nolan’s “Inception,” for which Zimmer wrote the score.

“We analyzed film scores and how composers create the music,” Gleckman said. “Randomly, he ended up seeing the ‘Inception’ episode and made contact. A few months later I did something on ‘The Dark Knight,’ and I got a message from him. From there, I got a chance to meet with him (in May 2018) and have a conversation. He was genuinely one of the nicest people I’ve met. He made me feel at home.”

“What they did ask is, ‘Can we hear your music?’” Gleckman said. “Hans and the Bleeding Fingers staff have an amazing ear for music. It’s all about, can you write music, and can you do it pretty quickly.”

Bleeding Fingers Music was co-founded by Zimmer, his business partner Steve Kofsky and Russell Emanuel. It is a joint venture with Extreme Music, part of Sony/ATV Music Publishing.

“It writes custom music for TV shows, everything from BBC shows to Netflix to shows on the History Channel,” Gleckman said. “They also score for ‘The Simpson’ as well.”

Gleckman will live in an apartment less than a mile from work and can walk or bike to work. His sister, Ariana, lives in Hollywood.

Gleckman attended the New York University film scoring workshop in June 2017 and spent six weeks in master classes in Vienna, Austria in the summer of 2018.

“That, for me, was like my university experience,” Gleckman said of the master classes. “There was Conrad Pope, who is a veteran in the industry who has worked on most of the ‘Harry Potter’ films and ‘Indiana Jones’ and ‘Star Wars.’ So, you’re learning directly from these people who have really made a name for themselves.”

Gleckman has written, directed and scored five films, including the award-winning short “The Soldier.” He earned the Best Young Filmmaker honors at the Los Angeles Film Awards in 2018.

“I got inspired by watching ‘Saving Private Ryan’ and wanted to make something myself,” Gleckman said. “(I had) Virtually no budget at all and had a few friends I tricked into helping me on the project and spent a couple of days shooting it. It was a big passion project. I wrote that, edited and wrote the music for it.”