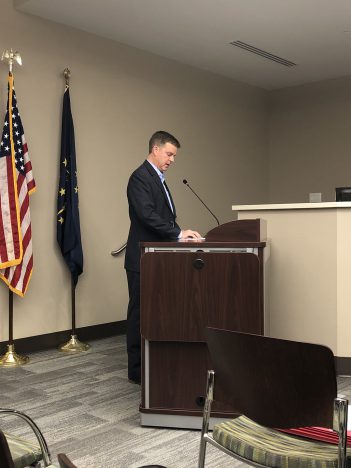 Zionsville Mayor Tim Haak read the first executive order of 2019 at the Jan. 7 Zionsville Town Council meeting. The order encourages statewide legislation and says steps will be taken in Zionsville to ensure those who commit bias crimes are identified. (Submitted photo)

The Zionsville Town Council unanimously passed a resolution the same day encouraging the Indiana General Assembly to pass bias–crimes legislation at the state level during the 2019 legislative session.

Bias crime is a criminal offense that is committed against a person or group motivated by the offender’s bias against a religion, race, disability, sexual orientation or national origin. A bias crime is often referred to as a hate crime.

Indiana is one of only five states in the U.S. without hate crime laws. The Indiana General Assembly is currently in session reviewing proposed legislation. Five different house bills involving hate crimes have been proposed, authored by various representatives.

Heather Willey, attorney and town councilor, presented Zionsville’s bias crime resolution to the council during the Jan. 7 meeting. The Zionsville Non-Discrimination Committee, chaired by town councilor Susana Suarez, unanimously approved the resolution when it met with Haak in December 2018.

The resolution states that the Zionsville Town Council and Town of Zionsville support adding protections for all people, regardless of race, ethnicity, religious beliefs, nationality, gender identity or sexual orientation.

“The (Indianapolis) Chamber (of Commerce) is supporting bias crime legislation that looks very similar to what you see before you in the resolution,” Willey said. “Many of the large business organizations around the state are participating (in the conversation).”

Willey said Zionsville is leading the charge as a municipality with its own bias crime legislation.

“We do plan to share our resolution with members of the General Assembly as well as the governor,” Willey said.

In Haak’s executive order, his first of 2019, the mayor urges Indiana lawmakers to pass legislation providing all Hoosiers protection against bias crimes.

The order states two steps will be taken to ensure those who commit bias crimes are identified. The chief of police and the Zionsville Police Dept. will establish training to inform and educate all Zionsville officers on ways to identify bias crimes and also will collect data associated with crimes motivated by bias.

“It’s important that we take a stand against hate and to uphold our reputation that Zionsville is a welcoming community for all residents, visitors and businesses,” Haak said. “The executive order and resolution send a strong message that something needs to get done in the next legislative session.”