You are at:Home»Current in Fishers»Fishers Community»Gooden, Makalusky named to Silver Anniversary Team 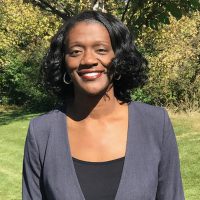 Gooden and fellow Fishers resident Jennifer (Sliwa) Makalusky will be honored as members of the Indiana Basketball Hall of Fame’s Silver Anniversary Team at the April 27 Women’s Awards Banquet.

“Wearing the No. 1 jersey during the Indiana-Kentucky All-Star series before a packed Market Square Arena crowd was truly amazing and to share this moment with many of my teammates 25 years later does feel like a full-circle accomplishment,” Gooden said. “The biggest difference is that my son, Elijah, and my husband, DeAndre (Kelso), can also share this special moment.”

An attorney, Gooden moved to Fishers in June 2017 when she joined Ogletree Deakins law firm.

At the end of the summer before her senior year, Gooden tore her ACL and everything else in her left knee.

“I was initially told that I may never play again and if I did, I would not be nearly as good,” she said.  “Of course, I was devastated at the prospect of never again playing the game I loved.”

She also didn’t want to give up on her Miss Basketball goal.

“We ended up getting a second opinion and I followed a very aggressive rehab protocol,” said Gooden, who played at the University of Iowa. “As a result (with a brace), I was able to miss the first four or five games and return to average nearly 30 points and 10 rebounds a game and not only earn the prestigious honor of Indiana Miss Basketball, but to be named the Naismith and Parade National Player of The Year. Going through that experience helped teach me to never give up. If I could overcome that injury, I can overcome other forms of adversity that may arise throughout my lifetime.” 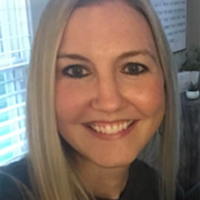 “I was upset and pretty bummed out that I didn’t get to be on the Indiana All-Star team,” said Makalusky, who played collegiately at Villanova. “It came down to lot of these girls went to really big schools and I went to this middle-of-nowhere school. For me, it’s awesome to be honored to stand with these girls.”

Makalusky’s husband, Michael, is a pastor at Madison Park Church of God in Anderson. They have two children, Riley, 14, and Maya, 12. Makalusky lived in Fishers from 2003 to 2012 and then returned in December 2017 after five years in Denver.