You are at:Home»Current in Fishers»Fishers Cover Stories»In the works: Construction on $157 million Browning Investments project to begin soon

A new type of development is coming to downtown Fishers. The $157 million project is the most expensive in the city’s history.

On Dec. 4, 2018, Browning Investments and the City of Fishers announced the project, which will span both sides of 116th Street in the heart of downtown. The mixed-use development is bordered by the Nickel Plate Railroad, North Street, Maple Street and South Street. It will include residential and retail units, a high-end boutique hotel and a six-story office building anchored by First Internet Bank, currently at 11201 USA Pkwy. 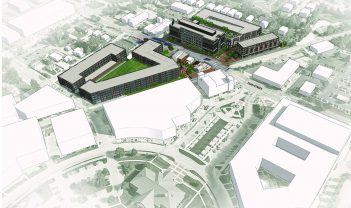 A bird’s-eye view of the $157 million development.

Mayor Scott Fadness refers to the development as an industrial-style project. He said it will look similar to the Ironworks development at 86th Street and Keystone Parkway in Indianapolis.
“It doesn’t mean industrial in the sense of there’s going to be smokestacks,” Fadness said. “What it means from an architectural perspective is this intersection of old meets new. To have core elements of historic buildings in the urban core, brick and glass and metal, that’s the intent and the image they’re working for.”

“I think that’s partly why we kept some of the older buildings, too, in the downtown, to demonstrate this homage to the past while embracing the future,” Fadness said.  “When First Internet Bank showed me what they wanted to create, I was blown away by the rendering. I thought it was an awesome vision.”

First Internet Bank is headquartered in a 52,000-square-foot building.

“Locating our company where our employees want to live, work and play is an important factor in our talent strategy,” First Internet Bank President and CEO David Becker stated in a press release. “And the fact that Fishers is known for being a smart, entrepreneurial city is a terrific component to our brand and our award-winning corporate culture.”

Although the development is expected to bring more traffic, jobs and leisure activities to downtown, Fadness said 116th Street won’t need to be widened.

“When you drive downtown Fishers, there’s a million different access points,” Fadness said. “By building bigger buildings, we eliminate that so you don’t have as many people turning in and out. It’s better from a traffic perspective.”

The project should be complete by fall 2021. 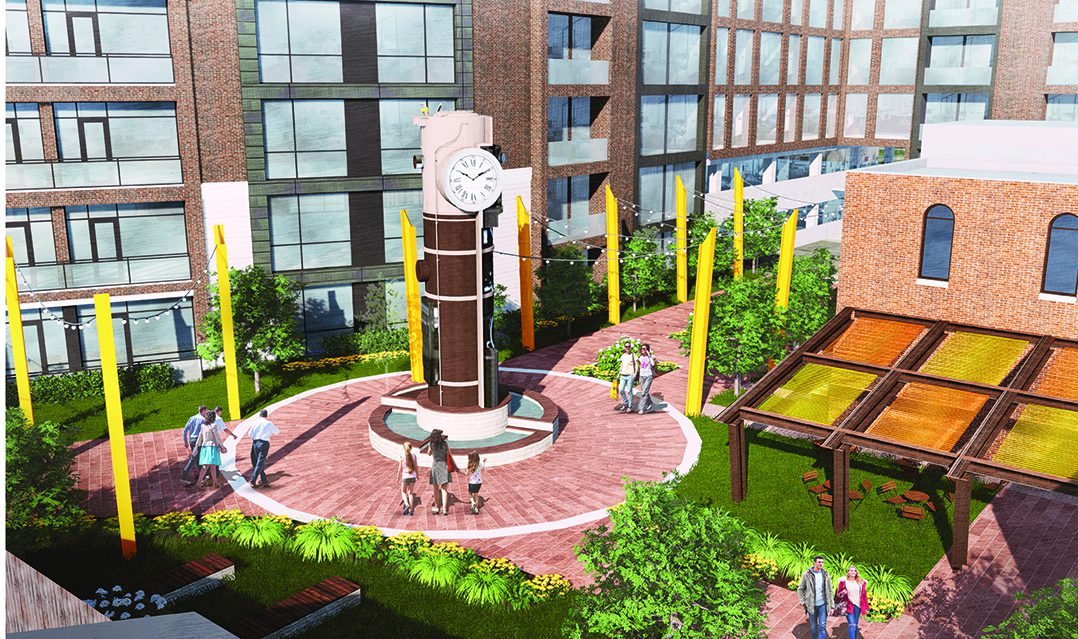 The Pocket Park will be relocated into a plaza gathering space on the north side of the development.

What to expect with the new development

The north side: Browning Investments and CRG Residential will build a five-story apartment building with 241 units, 10 townhomes, office and retail units along 116th, North and Maple streets. The city plans to build a 256-space parking garage here. The existing Pocket Park will be relocated into a plaza gathering space.

There are historical buildings in this area of the proposed development, such as Nickel Plate Bar & Grill, Roman and Leo, Fishers Barber Shop, State Farm Insurance and the former Vardagen and Sure Shot Coffee storefront. These will all be preserved, but the exteriors and landscaping will be rehabilitated.