On Jan. 3, Noblesville Common Councilor Megan Wiles announced her candidacy for a second term in the May Republican primary election.

Wiles is the representative for District 6, which includes the southeast area of Noblesville, including newer neighborhoods of Blue Ridge Creek, Chapel Villas, Flagstone Woods, Summerland Park, Turnberry at the Park, Waterman Crossing, as well as the Corporate Campus and Hamilton Town Center. 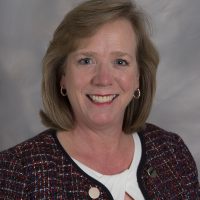 In her first term, Wiles was elected as council president and also created the council’s Downtown District Committee to help oversee the funds allocated to enhance Noblesville’s downtown. She also chaired the Economic Development Committee, served on the Finance Committee, the Noblesville Plan Commission, Architectural Review Board, Nominating Committee and was a liaison to the Noblesville Parks Board.

“I am so proud of the creation of the Downtown District Committee, where I brought together members of the council, along with business owners, the Noblesville Chamber of Commerce leadership, Noblesville Main Street leadership, as well as Nickle Plate Arts,” Wiles stated. “This group’s charge is to evaluate what we can do to continue to enhance our beautiful downtown. We’re just beginning to implement phases of the Downtown Streetscape Plan, and I’m excited to see the impact it has.”

Wiles also cited continuation of important infrastructure in the city as a reason to run again.

“As Noblesville continues to grow, we must continue to invest in our infrastructure to insure that we can handle this growth,” she stated. “I’m proud of the work of this current council to dedicate resources to plan for the future of our community, and there is additional work to be done. I believe it’s important that we have experienced council members serving along with our new administration in January of 2020 and beyond. I look forward to working with our new Mayor to help Noblesville continue to grow in a fiscally responsible manner. This is an exciting time to help lead Noblesville forward, and I look forward to serving the residents of the sixth district and all of Noblesville.”

Wiles is the executive director of Riverview Health Foundation, which builds resources and funds to support programs and projects at Riverview Health. She also is a member of the 29th Richard G. Lugar Excellence in Public Service class, one of 20 women in the state selected for the program.

Wiles and her husband, Greg, are parents to Garrett and Grace, both high school students. Wiles is a graduate of Noblesville High School and Ball State University and serves as a member of the Conner Prairie Alliance, the women’s organization that operates the Apple Store at Conner Prairie. Wiles and her family are members of St. Michael’s Episcopal Church.

The primary election will take place May 7, followed by the general election Nov. 5.

All seats on the Noblesville Common Council are up for grabs next year for terms that will begin January 2020 and end in December 2023.

Official candidate filing doesn’t begin until January, and no other candidate has announced his or her intention to run in District 6.

Pete Schwartz recently announced he will seek the District 2 seat, which is being made vacant by Councilor Chris Jensen, who is running for mayor. Rick Taylor (District 3), Will Hampton (District 4), Greg O’Connor (District 5) and Darren Peterson (at-large), all have announced re-election bids with no opponent so far.