You are at:Home»Current in Carmel»Carmel Community»Carmel Plan Commission sends The Overlook to city council without recommendation

The Carmel City Council will determine the fate of 200 dwellings planned at the northeast corner of Keystone Parkway and 136th Street after the Carmel Plan Commission forwarded the proposal Dec. 18 without a recommendation for or against the project. 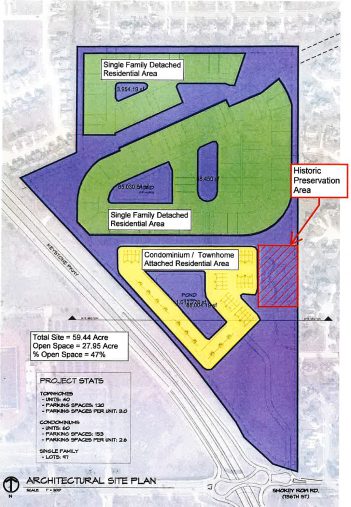 A 200-dwelling neighborhood is proposed at the northeast corner of Keystone Parkway and 136th Street. It includes the preservation of a historic home on the east side of the property. (Submitted photo)

Carmel-based Old Town Companies is requesting a rezone from residential to planned unit development for The Overlook, a neighborhood designed for empty nesters that would include single-family homes, multi-family units and open space on nearly 60 acres of undeveloped land. Justin Moffett, Old Town principal, said he has made many concessions after meeting with neighbors, such as reducing the number of dwellings from 235 to 200.

“We are at a point we think this is an appropriate development plan,” he said. “We’ve given a lot. It’s the minimum for us to be able to justify moving the project forward.”

Commissioner Laura Campbell, who is also a city councilor, said she could not vote for the project because of the additional traffic it would bring to an area that already experiences frequent congestion.

“Even if you say (the project impact is) just during rush hour, morning and evening, those are the most critical times for people,” she said.

Commissioner Joshua Kirsh, engineering administrator for the City of Carmel, said he expects traffic to improve in the area, as construction of a new roundabout at Main Street and Gray Road is complete and a Hamilton County project to add a ramp from 146th Street to southbound Keystone Parkway should help alleviate congestion. He also said there have been discussions about expanding the roundabout at 136th Street and Keystone Parkway to two lanes.

“I think the traffic situation there likely gets better with all of the factors we’re throwing at it,” Kirsh said.