The Zionsville Police Dept. arrested an Indianapolis man, Victor Sanchez, Dec. 22 after he allegedly stole a yellow Hummer from a Zionsville residence.

At 11:30 a.m. on Dec. 22, ZPD was dispatched to 6771 Berkley Ct., where a burglary was reported to be in progress. The suspect was allegedly attempting to steal a yellow Hummer with a trailer attached. 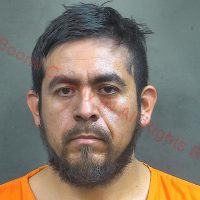 When ZPD arrived, the Hummer was gone. A similar vehicle was sighted by an officer near Kissel Road and Lafayette Road. Officers stopped the Hummer and confirmed the trailer was stolen.

Sanchez, 38, was operating the vehicle without a driver’s license. The victims arrived on scene to identify all items taken from Berkley Court.

Zionsville Police later confirmed a door had been kicked in and damaged at the residence on Berkley Court. Sanchez was taken into custody and transported to the Boone County Jail. He has been charged with burglary, theft and criminal mischief, among other charges.