You are at:Home»Current in Westfield»Westfield Cover Stories»Winter at the winery: Urban Vines Owner Noah Herron offers igloo rental to customers

Urban Vines Owner Noah Herron seems to know what it takes to draw customers to his winery on 161st Street in Westfield. His latest innovative approach is renting igloos.

Herron bought three igloos – essentially small garden greenhouses – after he noticed a brewery in Michigan had success with the concept. The structures are plastic-encased, igloo-shaped globes with a heater, lights and a radio. Each seats up to eight people. 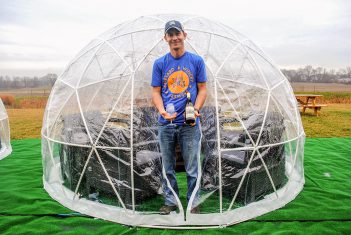 Noah Herron, owner of Urban Vines Winery and Brewery, offers igloos for rental on the property. (Photos by Anna Skinner)

“Just in general I’m a marketing person, so when I saw on Instagram the picture of the igloo, I thought it was really cool and they were getting really good response to it,” Herron said. “In Indiana, when wintertime comes, people start to hibernate. So, we are trying to do things outdoors where people can still be comfortable and have a good time.”

Herron installed turf under the igloos so mud and moisture aren’t a problem.

“It’s a nice outdoor, private area for people to hang out in,” he said. “In the wintertime, most businesses, most restaurants, most bars are kind of slow. We are trying to find things for people to do outdoors and be comfortable. So far, it’s been a hit with people and they really like it.”

Herron also installed an outdoor fire pit near the igloos, and he enclosed the previously outdoor patio and added a heater. The enclosure creates an extra 60 seats for the winery, and the igloos create an extra 24 seats. Musical performances have moved to the enclosed patio for the winter, so bands aren’t restricted to the tasting room. When the weather warms up again, the patio enclosure will be removed.

Igloo rent for $10 per hour. Herron’s goal is simply to make his money back through sales. Each igloo costs approximately $1,000. So far, booking hasn’t been a problem.

“It’s actually been nuts,” he said. “It’s been off-the-hook phone calls with them.” 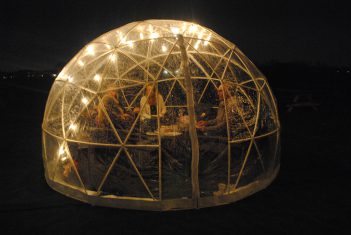 The igloos are heated and have a radio. They can seat up to eight people. There are three igloos available for hourly rental at Urban Vines Winery and Brewery.

Herron said there’s a possibility he will purchase more igloos next year. They can be rented through March.

“I imagine we will definitely expand and get more next year. People really like the ambiance of going out there,” Herron said. “When it snows outside and they’re all covered with snow, you’ll have your own little room and it’ll be really cool.”

Herron’s innovation appears to be paying off. Urban Vines has been open less than two years. In its first year, it exceeded its five-year revenue goal.

Urban Vines started with a staff of 15 and now has 25 employees.

“We thought we were going to be a quaint winery and be quiet, but since we’ve opened, we got really lucky with our location,” Herron said. “We are right in the middle of a lot of (neighborhood) communities.”

Herron has no immediate plans for expansion.

“It’s fun, but I think our biggest success is our location, so it scares me to open a second location,” he said. “Not only do we make a good product, but our location is key to our success.”

In a collaboration with several wineries around Boone, Hamilton and Madison counties, Urban Vines is one of the six stops on the Cardinal Flight Wine Trail. Urban Vines owner Noah Herron is president of the trail. Blackhawk Winery in Sheridan also is on the trail.

“The primary benefit is that the wine trail showcases that there are indeed many local vineyards in central Indiana that supply the grapes to local wineries which make quality wine,” Blackhawk Winery owner John Miller said. “The importance of the local aspect of sourcing and production is easily lost in this era where grocery stores offer a wide selection of international and domestic wines. Unique regional wines highlight distinct grape varieties that are not widely commercialized.”