Mark Westermeier has been at the helm of many major success stories as director of Carmel Clay Parks & Recreation, and he’s got the accolades to prove it. 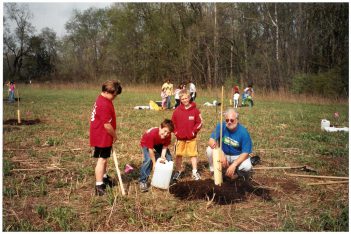 But as he prepares to retire after 15 years on the job, it’s the simple things that stand out among his favorite memories.

“I remember when we finished the restrooms on the trailheads. It was one of the first projects I was involved with, providing a place to stop and use the restroom on the Monon, as that didn’t happen before,” he said. “Those are the little moments, but they’re really good ones. Not only does it make me happy, it makes the people happy.”

The CCPR board accepted Westermeier’s resignation – effective Dec. 28 – at its Dec. 11 meeting. Although the retirement wasn’t discussed publicly, the department has been preparing for the transition for several years. CCPR Chief Operating Officer Michael Klitzing is expected to officially be named the new director in January and will serve in that role on an interim basis in the meantime.

“The park system is in good hands to take it to the next level, and that makes me very happy,” Westermeier said.

The business of parks

Westermeier, 67, a native of Columbus, Ind., joined CCPR as interim director in 2003 and became the permanent director a year later. At the time, the department had only eight full-time employees and little developed park land, but its leaders had big dreams for the future and believed Westermeier could help bring them to fruition.

Previously employed in the private sector in communications, Westermeier had no experience working in parks and recreation when CCPR hired him, but he had a business background that would prove useful in launching the before- and after-school care program at Carmel Clay Schools in 2006 and opening the Monon Community Center a year later. The Extended School Enrichment program was financially self-sufficient in its first year, and the MCC followed suit a few years later.

In part because of Carmel’s success in this area, strategies are changing across the nation to mirror what’s worked here. Westermeier said he always viewed the MCC as a business competing with other options in town for disposable income.

“There’s a great opportunity in the fact that if we can create an experience that is equal to and better than what can be offered by anybody else (locally), we can oftentimes do it at a lower price point because we don’t have to make a profit,” Westermeier said.

‘Bringing the community together’

When Westermeier joined CCPR, Carmel had a lot more undeveloped open space and, subsequently, less of a demand for parks. But having lived in several states and enjoying more developed park systems, he agreed with Carmel Mayor Jim Brainard that CCPR could become a useful tool for the city if it expanded in the right way. 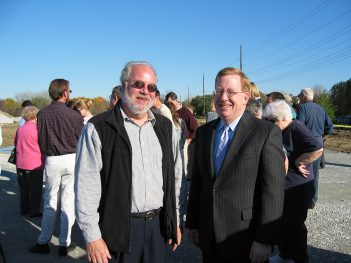 “People that had lived here for a long time didn’t really see much need for anything, but other people like myself who had moved here from other cities knew that parks could be a bigger part of the community,” Westermeier said. “Mayor Brainard was instrumental in understanding what it does from an economic standpoint as well as bringing the community together.”

Although there was a long way to go, the board told Westermeier to work toward CCPR earning a Gold Medal from the National Parks & Recreation Association, the most prestigious honor a parks system can receive. In 2014, CCPR accomplished its goal, and other park systems took notice.

“Under Mark’s leadership, CCPR has been transformed from a relatively small, typical department to a nationally recognized park system, culminating with CCPR winning the National Gold Medal Award and receiving national accreditation,” said Lisa Nye, executive director of the Indiana Park & Recreation Association. “I think Mark’s commitment to the field has also been demonstrated in his desire to become professionally certified, achieving his Certified Park and Recreation Professional credentials in 2014.”

With the national accolades under his Belt, Westermeier said it makes sense to step down now. 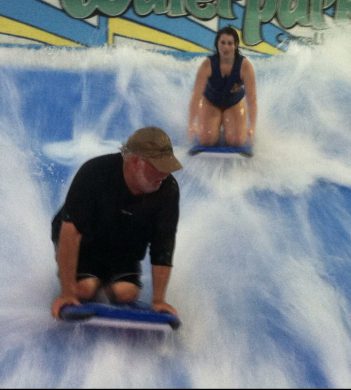 Mark Westermeier, left, surfs the Flowrider with his daughter, Olivia, at the Monon Community Center. He said the Flowrider’s installation was among his favorite memories during his time as director of Carmel Clay Parks and Recreation. (Submitted photo)

“I’ve accomplished everything I’ve set out to be accomplished,” he said. “It’s time for a new leadership team to come in and take the park system to the next level, which will be much higher than we’ve been at. It’s good timing personally, as well.”

He’ll miss his coworkers, which have grown to include 65 full-time and nearly 550 part-time employees.

“Many of the people have been here eight or 10 years,” Westermeier said. “When you work with a group that long, you really get to know them and know their families through them. It’s sort of tough to say I don’t know if I’m ever going to see them again.”

The retiring leader is being honored as a permanent part of West Commons in Central Park, which contains one of Carmel’s most popular playgrounds. The area known as West Commons has been renamed Westermeier Commons.

“It was totally unexpected and a great honor,” Westermeier said. “There have been so many people who have been instrumental in growing the park system and Carmel Clay Parks & Recreation, without who we could not have accomplished all that I have been honored in my retirement. It is very humbling.”