For many of Boone County’s law enforcement officers, 2018 has been a tough year.

In March, the Boone County Sheriff’s Office lost one of its own when Deputy Jacob Pickett was gunned down in Lebanon while pursuing a criminal on foot. Pickett, a 34-year-old Zionsville resident, was the first officer in the county to be killed in the line of duty since 1935.

For Pickett’s family and co-workers, the wounds are still fresh. Since March, the community has mourned him and held several fundraisers to support his family. Public Information Officer Chris Burcham said there have been other recent tragedies across Boone County, including a double-murder suicide in Zionsville Sept. 21.

Dispatch Officer Lydia Edwards, seeking a way to remember Pickett during the holidays, was inspired when she read about a police department in Texas that used tree ornaments to honor fallen officers. She said she felt the BCSO could do something similar.

The 9 1/2-foot tree features 145 ornaments, one for every American law enforcement officer killed in the line of duty in 2018. Each ornament has the officer’s name, rank and end of watch date, hand-written by BCSO staff members.

When the tree was first erected in early December, there were 137 ornaments. Eight officers have been added to the list in less than one month.

“We’re all very close here. We’re a family,” Senior Dispatch Officer Mike Gideon said. “Every officer across the nation is our family, too.”

Chaplain Andrew Ramey said the tree is a symbol of hope.

Once the tree was up, community members began taking notice. After receiving media coverage on Fox News, the tree drew national attention. 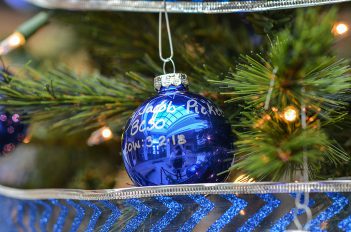 Employees of the Boone County Sheriff’s Office decorated a Christmas tree in the lobby of Boone County Jail to honor fallen officers. An ornament represents the life of Deputy Jacob Pickett, a Boone County officer who died in March. (Photo by Sara Baldwin Schatz)

A Dec. 13 Facebook post made by Fox News contains a video about the tree. It has more than 177,000 views. The post also was shared by Franklin Graham, son of evangelist Billy Graham, and received more than 63,000 Facebook likes, comments and shares.

“I had no idea this would touch the hearts of people the way it has,” said BCSO Chaplain Joni Scott, who helped decorate ornaments and put up the tree. “Anything that brings people together as a community and helps comfort the families of the fallen officers is always a worthwhile venture.”

The BCSO plans to mail the ornaments to their respective police departments at the end of the year.

“This hit home this year for us with losing Jake,” Gideon said. “It’s our way of paying tribute to all the fallen officers nationwide. We want them to know they are in our prayers and thoughts every day.”

The holidays were not the only reminders of sacrifice. Pickett’s birthday, Dec. 20, was quietly celebrated at the BSCO. 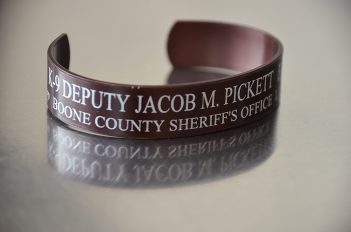 Since his death, the BCSO has continued to honor Pickett. There are photos, plaques and a special ornament hanging in the office. Several BCSO employees wear engraved metal bands in remembrance of their former co-worker. Some have tattoos in remembrance.

Money raised during an Oct. 6 polo match at Zionsville’s Hickory Hall Polo Club will pay for the Pickett family to participate in National Police Week activities. The match, organized by Megan Cantrell, raised $17,000.

Michelle Atkinson, a close friend of the family, said Boone County Sheriff Mike Nielsen, as well as Pickett’s family and friends, hope co-workers can attend the D.C. memorial as well.

“The deputies attended the funeral but had to get back to work quickly,” Atkinson said. “National Police Week would be a good time for them to take some time, reflect and mourn the loss of their co-worker and friend.”

With help from Jen and other friends, Atkinson launched the Sponsor a Deputy fundraiser, which aims to raise $20,000 to help fund the BCSO’s efforts to send as many staff members as possible to the event. The estimated cost is $1,000 per person. A Facebook fundraiser raised more than $4,000.

“There are a lot of people who worked alongside Jake that would love to be there,” Atkinson said.

State troopers and other outside officers plan to aid the BCSO by covering the officers and staff members’ shifts during the event.

“(Jen) is so incredibly grateful for the community support,” Atkinson said. “She said she’s getting tons of Christmas cards and people are still sending things for the boys. People are still thinking about Jake.”

The fundraiser will continue through May. To contribute, visit paypal.me/BCSOk9donationfund or mail a check to BCSO, 1905 Indianapolis Ave., Lebanon IN 46052.