You are at:Home»Current in Fishers»Fishers Community»Back in the Day: Vardagen’s vault history

Vardagen announced in October that it would be closing its physical store after six years in Fishers to focus its efforts online. I had the opportunity to go inside while they were moving, and I noticed a large vault built into the wall. For a T-shirt printing company, that may seem out of place, but if we were to take a step back in history, it would all make sense. 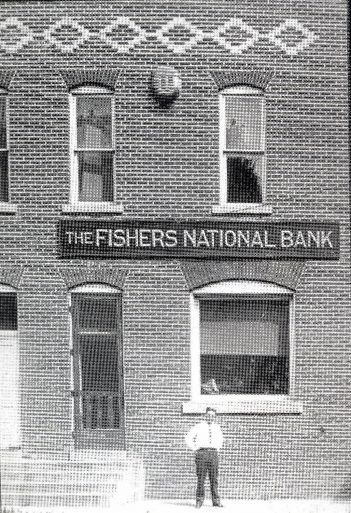 Vardagen was the last store to occupy the same building which Fishers National Bank did in 1913. (Submitted photo)

On July 8, 1913, a small parcel of land along Main Street (116th Street) would become home to the newly formed Fishers National Bank. J.B. Manship would serve as the bank’s first president. Fishers finally had a place for residents to transact financial business without having to go to Indianapolis or Noblesville. The bank ran advertisements in the Hamilton County Ledger. Residents were assured their money would be safe in the new fire-proof vault, and a safe deposit box would only cost $1.50 a year.

I first thought that it was unique, considering the size of Fishers, that it would have its own bank. But I discovered many small towns across the U.S. had their own bank. The National Bank Act of 1864 established federally issued bank charters which took the power of banking out of the hands of state governments. Fishers was issued charter No. 10419. To put it into perspective, the first bank in Indiana to get a charter was the National Bank of Fort Wayne (No.11), chartered in 1863.

The Fishers National Bank closed in 1930. But as I stood there staring at the vault, I imagined what it was like inside the building during its 17-year existence. The bank’s long-time cashier, A.P. Butz, meticulously inventorying the money. or bank teller Vera Mollenkopf greeting another customer. This building also had a few suspenseful moments which we will learn about in the coming weeks.