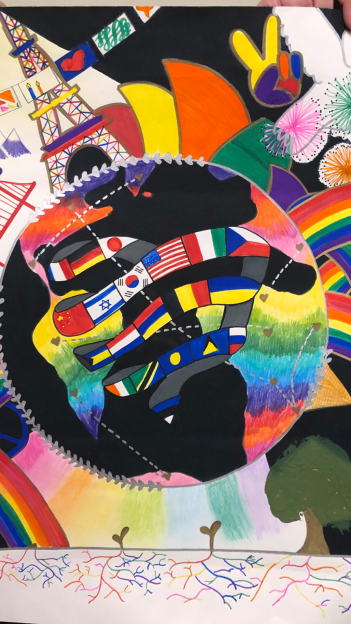 “We were very excited that Lily was chosen to represent Zionsville and then Indiana in this competition,” said Lily’s father, Jeff Lovell. “The poster project really resonated with her and she was passionate about this opportunity to express herself.  We are proud of her hard work, creativity and the message she sought to convey.”

Lily worked on the project during a three-week period at school and at home. Her global theme began with a sketch of the earth, draped in a ribbon made up of nations’ flags. She added iconic landmarks, like the Eiffel Tower, Sydney Opera House and Pyramids. Lily filled the background with symbols of peace and kindness: olive branches, doves, peace signs, hearts and light shining onto the earth. At the bottom, she imagined kindness as a seed and depicted it growing into a tree with deep roots.

According to the Zionsville Lions Club’s Immediate Past President Gail Robbins, the contest was created so that children between the ages of 11 and 13 could express themselves with their “Vision of Peace.”

Each local Lions Club chose a school to sponsor. A local Peace Poster chairperson then spoke with the school’s art teachers on the theme and content guidelines. The winner from each local club proceeded to the state competition.

The winner for each state will compete in the national competition, which will be judged on Feb. 1, 2019. The Lions Club International judges have backgrounds ranging from art, education, media, peace and youth communities.

State-level winners receive $5,000 and a trip for themselves and two family members to the award ceremony and international convention held in Milan, Italy in July 2019. The international judging will take place Feb. 1, 2019.