You are at:Home»Current in Carmel»Carmel Community»‘Big E’ remembered fondly by friends, former teammates

Former Guerin Catholic basketball coach Pete Smith said he was the “Big Easy” to many.

“He had a wonderful way of dealing with life,” said Smith, a Noblesville resident who retired as coach in June. 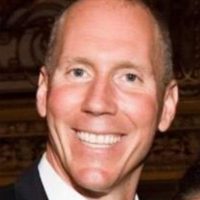 Anderson, 48, died earlier this month at his Carmel apartment of natural causes, with a specific cause not announced as of press time. He reportedly had recently had pneumonia. Anderson, Guerin’s first athletic director, had moved to Carmel a few months ago for his job as a commercial account executive with Fidelity National Title. His service was Dec. 14 in Crown Point.

“I took up a pair of shoes Eric had left behind and told his son, Sam, ‘Your dad left a footprint of what has turned out to be a terrific athletic program,’” Smith said. “He started an athletic program with very little budget. I remember him saying, ‘Coach, we don’t have enough money for this. We can’t do this.’ But we found a way to get it off the ground when Eric was our AD.”

Anderson, who lived in Noblesville for several years, left Guerin in the spring of 2007.

“The Guerin community was sick when he left because he didn’t get to reap of any of the benefits from his work,” Smith said.

Smith recalls Anderson making a possession arrow with a red arrow on a popcorn box for the school’s first basketball game.

“We hadn’t bought a possession arrow,” Smith said. “Nothing rattled the Big E.”

The 6-foot-9 Anderson, whose college career ended with a loss to Duke in the 1992 Final Four, is 11th in career scoring for the Hoosiers. He played for the New York Knicks for two seasons and then played overseas.

Former IU player Brian Evans, a Carmel resident and close friend, made a DVD of video clips from former IU players and friends talking about Anderson to give to Sam, 20.

“He was just a phenomenal human being,” Evans said. “More than anything he valued fatherhood as his No. 1 priority. His entire world revolved around his kid.”

Evans was a freshman Anderson’s senior year. He saw Anderson accept the role of moving to the bench late in his senior season after being a starter most of his career.

“He was an inspirational leader. Everybody loved Eric,” Evans said. “He was a tough-minded guy.”

Evans said he and Anderson each have two sisters.

“As our relationship started, he was a little bit of a big brother to me,” Evans said. “Over the years, we’ve kind of been a big brother or little brother to each other depending on what was going on in each other’s life, whether we needed advice or a kick in the butt.”

IU Deputy Athletic Director Scott Dolson finished his tenure as an IU basketball manager the season before Anderson arrived on campus. While working in Bloomington, Dolson lived with Anderson for 1 1/2 years and became a good friend.

“I can’t imagine a better person to hang out with,” Dolson said. “He had a lot of fun.  He was really funny, made you laugh. With all his success, he had zero ego. People were just attracted to Big E. They loved hanging out with him. He was one of a kind.”