You are at:Home»Current in Geist»Geist Community»Lawrence resident headed to Indiana High School Swimming and Diving Hall of Fame 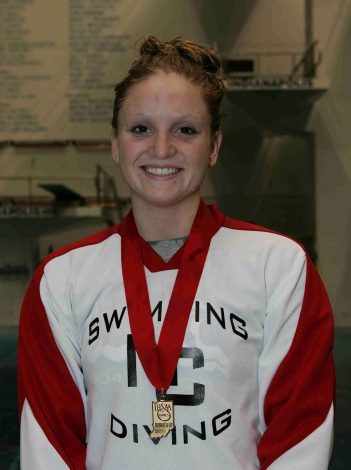 “I started swimming before I can even remember, all around Indy. I started at the Riviera Club and then moved to the Washington Township club team,” said Shehorn, a 2005 North Central graduate. “I went to Park Tudor for elementary and middle school and swam with them, then I went to North Central for high school and swam there.”

“Looking back, I was really lucky,” she said. “I had great teammates. It was an amazing team. I swam for both the high school and club team at Washington Township and North Central.”

“It (the team) was just your family. You were always with your family,” she said. “It was exhausting, but it was so rewarding when all that hard work would pay off in the end. It all pays off and comes together.”

Shehorn said she couldn’t have accomplished what she did in swimming without the support of her team and family.

“I am very humbled by this honor and grateful for all of the love and support that I have in my life and had during high school to allow me to accomplish what I did,” she said.

Shehorn no longer swims but has a 2-year-old son, Caden, in swimming lessons.

Sophomore year (2003): Shehorn placed third in the 200 freestyle at the state meet and was a member of the championship 200 and 400 freestyle relays.

Junior year (2004): Shehorn was the 500 freestyle state meet champion was runner-up in the 200 freestyle.

Senior year (2005): Shehorn repeated as state meet champion in the 500 freestyle and was again runner-up in the 200 freestyle. She was also the recipient of the IHSAA Mental Attitidue Award for girls swimming.