Logan Dellinger has strived to make a difference since he joined the Boy Scouts of America more than nine years ago. 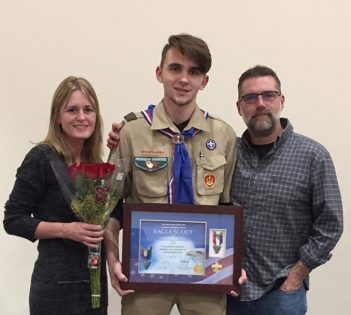 “The reason for helping veterans in particular is a lot of veterans that come back from deployment have trouble getting jobs and end up becoming homeless,” Dellinger said.

Dellinger provided 25 backpacks with self-care items to Indianapolis-based Wheeler Mission Ministries. He also raised and donated approximately $300 and dozens of boxes full of hundreds of items needed by the mission, such as shampoo, toothbrushes and bars of soaps.

Dellinger said all the items came from community donations. Westfield’s Christ United Methodist Church was among the donors.

Dellinger said he also placed a donation box in his neighborhood and used public forums, such as the Nextdoor app, to collect donations.

“Most of the donations came right to our door from neighbors anonymously,” he said.

Former WWS school board member David Mueller helped Dellinger with the project and put him in touch with Wheeler Mission.

“I hope the community will see this and that it raises awareness for homeless veterans and what they go through and how we can help them,” Dellinger said. “I also want to inspire scouts to do more hands-on projects by helping more people in need.”