He’ll share that love with New Year’s Eve partygoers at the Palladium.

“Folks hanging out with us will be bopping along with the high-energy dance music of the 1950s,” Martinie Eiler said of his band, Martinie’s Boogie Trio. “We do originals as well, but we love doing our own takes on the acoustic roots of rock and roll and soul music. We do a lot of early rhythm and blues. We do jump blues from people like Louis Jordan. We do music from soul folks like Ray Charles. We do a lot of great rock and rollers like Little Richard, Jerry Lee Lewis and anything that’s got a piano and makes people jump up and down, we take a stab at. That’s kind of our mojo.”

The New Year’s Eve Extravaganza begins at 9 p.m., and lasts until 1 a.m.

Martinie’s Boogie Three will appear in the Founders Room. Living Proof will perform on the Palladium stage. 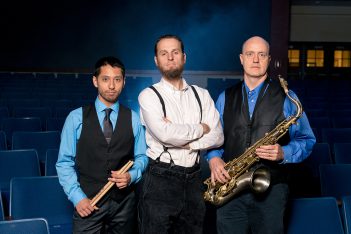 “It sounds like a super-fun party and we’re glad to be a part of it,” Martinie Eiler said.

Piano player Martinie Eiler and his fellow bandmates, Joe Donnelly, saxophone, and John Valdez, drums, have been playing together for three years.

“We enjoy spending time together,” Martinie Eiler said. “It’s been a wonderful experience in that way.”

The band released its first album in August.

“We played a Peanut Butter and Jam program for kids at Palladium and I think people thought what is good for the kids is good for the grown-ups,” Martinie Eiler said. “We’re delighted to come up to Hamilton County. We mostly stay in southern Indiana, Bloomington or Brown County.”

“Just enough to keep our chops up and keep it rolling,” he said.

Living Proof has a reputation of being one of the top cover bands in central Indiana. Julianne Hess is one of Living Proof’s eight band members. The band has a horn section and six lead vocalists.

“We have played every New Year’s Eve for more than 15 years, including events such as NYE weddings to downtown Indy countdowns,” Hess said. “We look forward to playing at the Palladium, the most breathtaking venue in central Indiana.”

Hess, who lives in Pendleton, said the members all live in central Indiana.

“We play a variety of dance music, covering hits from yesterday and today,” Hess said. “Some of our greatest musical influences are Earth, Wind & Fire, Justin Timberlake, The Jackson 5 and Bruno Mars. We always provide a non-stop party experience to keep guests dancing all night long.”

Living Proof first formed in 2002. Hess said it has grown in popularity every year since.

“Although most members have changed since the band first began, the spirit of the group remains unchanged with the same musical influences and collective vision to provide a positive musical experience for audiences of all ages,” Hess said. “With so many vocalists on stage, it allows us to sing a wide variety of music that plays to each of our vocal strengths. We also have some of the tightest harmony and group vocal arrangements around.”

Where: Palladium, the Center for the Performing Arts, Carmel.

What: There will be food and desserts included with the ticket and a cash bar. In addition to the musical performances, at midnight the Palladium balconies will offer a view of the annual New Year’s fireworks display presented by the City of Carmel.

Tickets: Tickets are $95. For tickets and more information, contact the Center Box Office at 317-843-3800 or visit TheCenterPresents.org/NYE.