You are at:Home»Current in Fishers»Fishers Community»Hamilton Southeastern High School teacher awarded Arts Educator of the Year 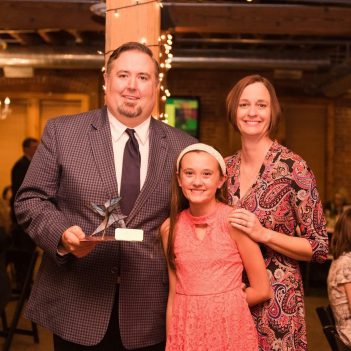 “The Nickel Plate Arts organization, they have an award every year for Emerging Artist, and they decided to do a first-time-ever Teacher of the Year award,” Follis said.

Besides teaching, Follis runs a sculpting business and has worked as a producer and assisted with production design for Disney, Lucasfilm and several other organizations.

“Usually, the events I get to go to are in L.A., and my family doesn’t get to go,” Follis said. “I come back from art shows in L.A . and do all sorts of interviews, but my family never gets to see it. So, it’s really fun for me, my wife and daughter got to get dressed up.”

“For years, we’ve studied films and we would make some short films, which is a pretty common thing for high schools to do now,” Follis said. “I worked on a movie (‘The Storyteller’) that won Heartland Film Fest last year, so my goal was to try to make something that was more realistic to the filmmaking experience. When you make short films, it’s you and your three best friends on your phone. But a filmmaking experience is professional. It’s stressful. It’s another thing, so our goal was to do that for them, to pull together the best artists, the best writers and the best actors in the school to create a film.”

Follis received his award in September at the third edition of the Nickel Plate Arts Awards. For more, visit hseschools.org/happenings/news/hhs-teacher-recognized-for-work.