You are at:Home»Current in Carmel»Carmel Community»Carmel City Court Judge to seek re-election in 2019

Poindexter has served in his role since Gov. Mitch Daniels appointed him in 2008. Voters re-elected him in 2011 and 2015. 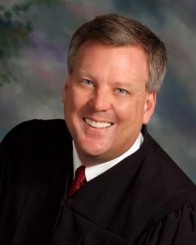 During his time in office, the Carmel City Court became the first in Indiana to use new technology that greatly reduced the amount of paper used by offering electronic case filing.

“By introducing better business practices and securing advances in court technology, I have increased the ability of the court to serve the public while simultaneously identifying funding sources resulting in reduced costs to the taxpayer,” he stated in a press release announcing his re-election bid. “Carmel is an extraordinary community. It is not only where I have chosen to live and raise a family but where I recognize that I can best serve the public.”

Poindexter lives in Carmel with his wife, Anne Hensley Poindexter. Their daughter is a graduate student at the University of Indianapolis.