Although Hamilton County is the wealthiest county in the state, animals at the Humane Society for Hamilton County’s facility don’t have access to many services. HSHC Executive Director Rebecca Stevens said even animal control facilities have more services than the HSHC.

“What people have to understand is (our building) is actually missing fundamental areas that even an animal control facility has. Our design today is literally missing an intake area for cats,” Stevens said. “We don’t currently have a medical wing. There are no exercise areas, no storage.  There’s no meeting space, no quarantine area for contagious animals.”

However, the animals’ environment may be improve soon because of a $12 million capital campaign to construct a new 40,000-square foot facility at 106th Street and Hague Road in Fishers. The goal is to open the shelter within the next 1,000 days.  The current shelter only has 8,000 square feet of space.

“We are not doubling everything. That’s not the solution, to keep adding more cages. The solution is looking at building a facility that’s going to sustain the growth of this county and its needs,” Stevens said.

HSHC hired Shelters for America to consult in designing the new shelter. Noise control is a priority in the new facililty, which will have plexiglass instead of barred cages.

“Today, the best way to explain the challenge we have is you have a dog in a kennel with no noise control and no visual barrier between dogs on each side or across from it,” Stevens said. “There is very little disease control. You have an animal come into the shelter and it immediately declines, behaviorally and health-wise.” 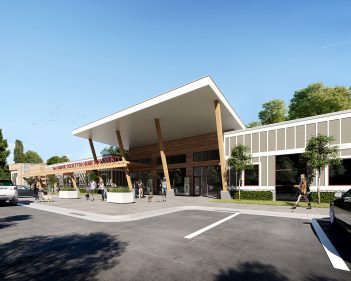 A rendering of the entrance to the new Humane Society for Hamilton County facility. (Submitted renderings)

Mike Barnard, the president for Shelter Planners of America, said cats and dogs will be housed with two compartments per animal in the new facility.

“Each animal in its housing unit would have two spaces – its primary enclosure where bedding and water are located and another space to go eliminate, and that just takes a lot more square footage,” Barnard said. “It does a lot for the animals in their condition and also enables the staff to clean the shelter much faster.”

Despite its current limitations, Barnard HSHC is a well-run facility.

“This organization is very healthy and vibrant,” he said. “We do go to a lot of shelters around the country that are just not as well led.”

With the new facility, HSHC will be able to expand its educational and outreach programs.

“We’ve been unable to expand programs, unable to offer the community what we know they want and what we know we can give,” Stevens said. “This is such a great way for us to be able to plant more seeds in our youth, in the community, of kindness and what it means to be kind to animals and the importance of pet adoption.”

Other programs Stevens wants to expand are the Pets Healing Vets program, where a shelter animal is placed with a veteran, and long-term placement for active-duty military who are deployed and have no one to care for their pets.

The HSHC is seeking donations for the new facility. The first $1 million has already been donated by an anonymous contributor. For more or to donate, contact Stevens at hamiltonhumane75@gmail.com. To view a video on the new shelter, visit https://www.youtube.com/watch?v=noToUYdupm4. 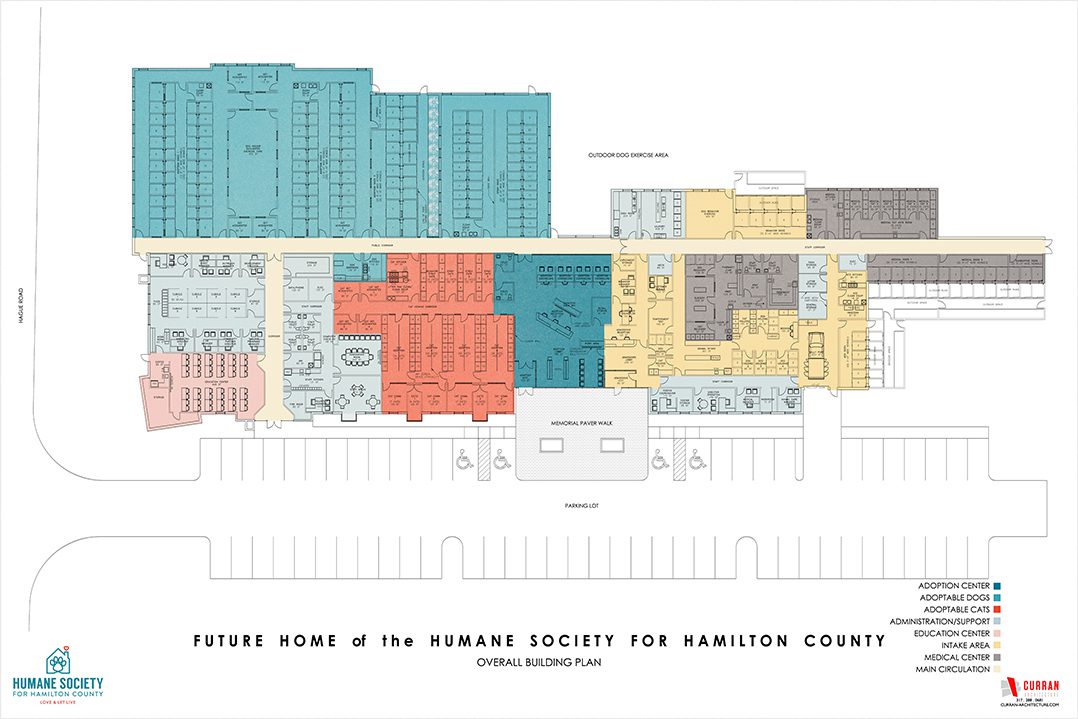 Humane Society for Hamilton County Executive Director Rebecca Stevens said with a new facility, the HSHC expects quicker turnarounds for animals. Although capacity won’t double, a quicker turnaround will lead to more animals entering the shelter and, in turn, being placed in homes.

“Because of the kind of kennels and set-up (at the new facility), a dog would get adopted in a fraction of the time it takes to adopt out in the facility today because he doesn’t show well,” Stevens said. “He’s declined, health-wise. Every day they’re there, they cost us $12 a day,” Stevens sad. “The goal was to create a design and kennels and a cattery that would prevent that rapid decline of the animals so they continue to show better and move (out of the shelter) faster.”