Hundreds of law enforcement and government officials played a part in the response to the May 25 shooting at Noblesville West Middle School. Now, more than six months later, Hamilton County leaders have shared more details of the behind-the-scenes work done by the Hamilton County Public Safety Communications Dept.

Much of the discussion focused on preparation and the work county agencies had done before May 25 to make law enforcement and communications responses run as smoothly as possible.

“One of the first things that we’ve done in the 5 1/2 years that I’ve been in Hamilton County is work on our preparation and our training,” Snowden said. “We created our own training standards because Indiana does not have any training standards for public safety telecommunicators. We’ve been doing active assailant training for two or three years now. As a matter of fact, the very day before this incident, our folks that were on duty had active-assailant training, which was specific to Hamilton County. Our folks weren’t blind that day. They knew exactly what our field units were going to be doing, and there was much more teamwork displayed because of that.”

Hamilton County Public Safety Communications has 83 employees and is one of the four largest public safety communications agencies in the state, Snowden said, adding that normal staffing is approximately 12 during peak hours and that 911 receives approximately 850 calls for service in a 24-hour period. 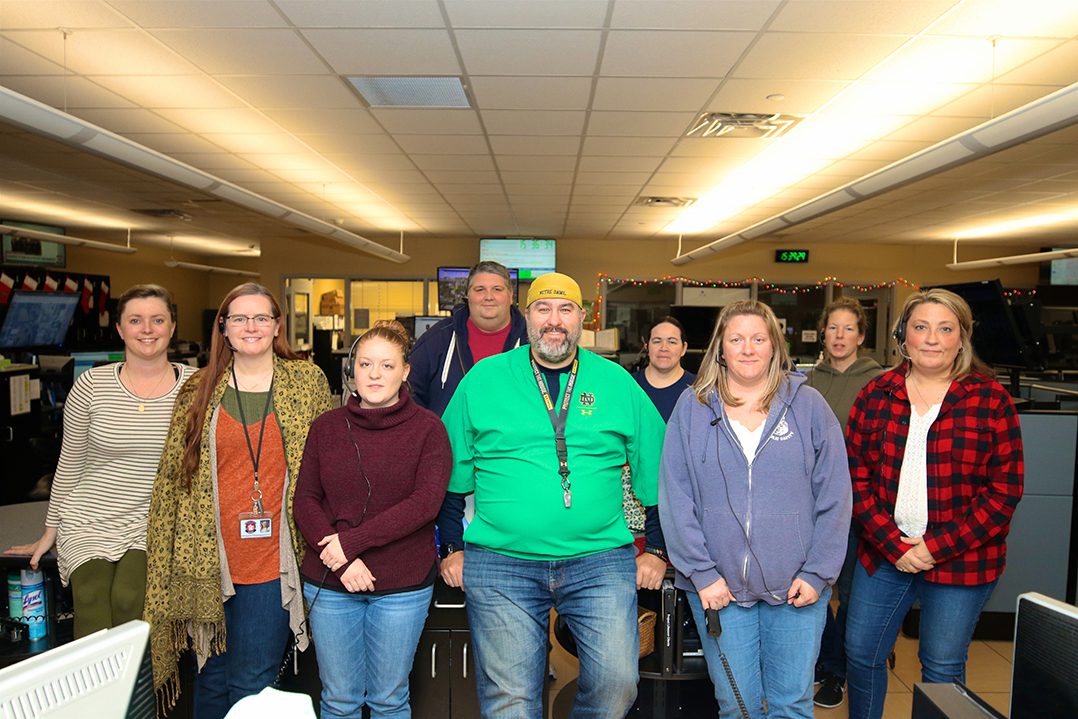 The partial crew of dispatchers who took emergency calls during the May 25 shooting at Noblesville West Middle School. (Photos by Sadie Hunter)

Moore was in custody within three minutes or less, Snowden said.

Only 11 dispatchers were working less than 5 miles from the school at the time of the shooting, but Snowden said within three minutes, five staff members arrived at the call center to assist. Within 15 minutes, three more off-duty staff came to work, filling all of the call center’s consoles.

“The phone calls were overwhelming,” Snowden said. “Trying to put plans together on the fly when this incident happens to you is not the time to do it. In the 9 o’clock hour, we took about 203 calls, so about six hours worth of work within an hour.”

Snowden also spoke about how typical 911 calls during this time did not stop.

“There were 363 additional calls for service: two suicides, 27 traffic crashes, 18 suspicious circumstances, 11 traffic hazards and eight thefts, among others,” Snowden said. “In other words, life in Hamilton County did not stop because we had an active assailant incident. Everything was still going on for our 315,000-plus citizens, and we had to be able to handle their problems just as much as Noblesville West Middle School’s.”

“Before our (staff) left that afternoon, we had a critical incident stress management team on site talking with them, giving them the chance to talk through what they had dealt with that day and trying and give them some sense of calm about what they had handled,” Snowden said. “The mental health resilience of our staff is very critical and we take it very seriously. (That team) came back several days in a row to make sure they were as OK as you can be when you take a horrific call or several horrific calls. About five days post-incident, we had an operation debriefin. We have continued offering assistance to our staff as needed.”

In November, dispatchers were able to meet with teacher Jason Seaman, who was shot three times May 25 by Moore.

“It was important for our folks to have a chance to meet with the victim,” Snowden said. “We’ve all seen his face many times, but to be in the room with him and hear from him and that he had appreciated their hard work was absolutely crucial.”

Snowden said the department also is working on a peer support team, along with additional active assailant training, for the 911 center’s staff.

“We believe it’s not a matter of if, it’s a matter of when,” Snowden said. “It’s the world we live in, and I absolutely hate it, but it is what it is, and if we’re not prepared, even more prepared next time, we’re only hurting ourselves.”