“I’m really sad to see it go,” he said. “We’ve had people who said this is a real important (place) for them, and I hate that. I like it and I hate it. I like it because we’ve done a good enough job at making them feel connected to us, but I hate it because they’re sad.”

Adam Hoffman, owner of Big Hoffa’s Smokehouse, which is connected to Main Street Shoppes on its south side, purchased the antique mall and has plans to expand Big Hoffa’s in the 16,000-square-foot space.

With the expansion, Hoffman said the kitchen will have more space to better serve customers.

“We run a tight ship and do not have much room to do it. Some weekends we will serve over 2,500 people, so our kitchen space is difficult to work in,” Hoffman stated in an email. “We will now be able to offer our customers more choices because we will have more room to prepare the foods we have been wanting to introduce.”

Beer and wine selections also will increase. Seating will increase and the expansion will add more bar and counter seating. Big Hoffa’s will remain open during the expansion and Hoffman plans to open the new space before the end of the summer. 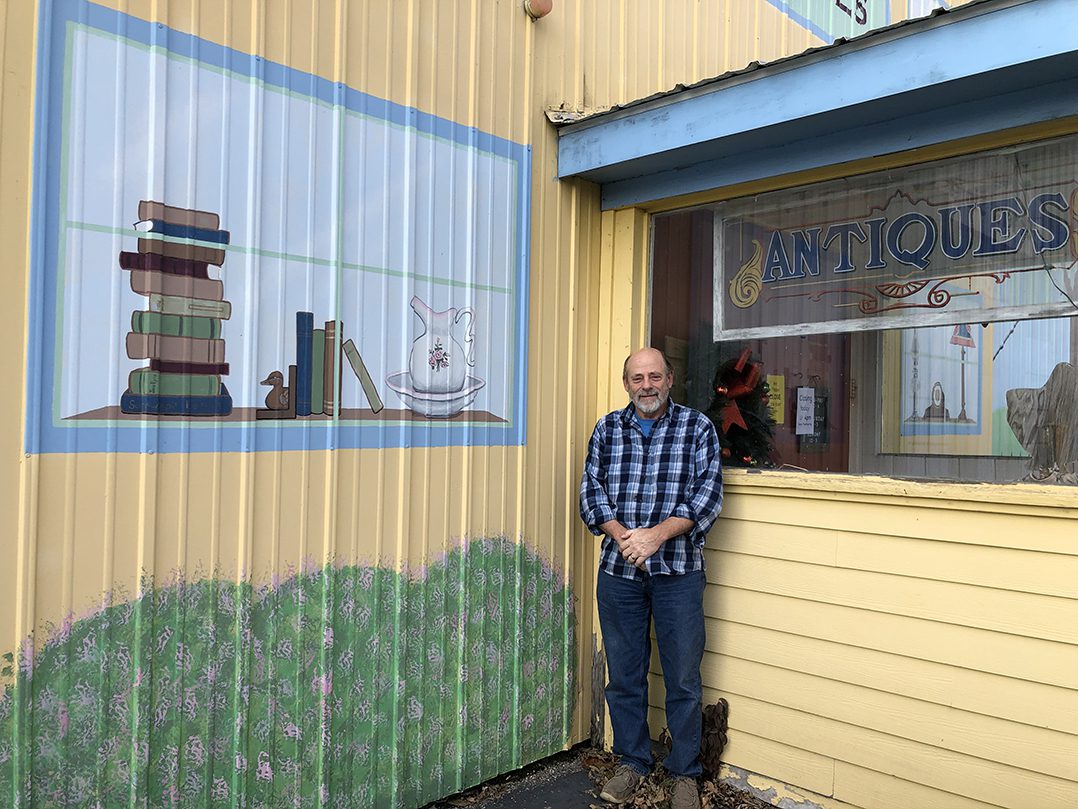 Crim said he wasn’t looking to sell Main Street Shoppes and that business was going well, but he and Hoffman have been in discussions for the past six months. Neither Crim nor Hoffman disclosed the selling price.

Crim has been in the antique business for nearly 22 years. He majored in history in college. In 1997, a church friend owned an antique mall in Noblesville. Crim and his wife purchased the mall from his friend, who was trying to sell it, three months later.

“We started talking about it, and I didn’t know anything about antiques,” said Crim, a Noblesville resident. “The more we talked about it, the more it worked out as a good deal and we bought it from him.”

“The market has changed so much in the time we’ve been in this business,” Crim said. “Twenty years ago, antique malls basically only catered to customers who were serious antique collectors, so everything had to be pure in its nature. There came a time in the mall business when it got bad. From 2002 to 2009, (business) was really tough, but it evolved out of that. So now, in this business, in our building, we have a conglomerate of customers. The collectors still come in, but we have a lot of younger people come in.”

Main Street Shoppes’ primary clietele are females ages 35 to 50 who purchase items mostly for decorative use.

“That’s the only way you can really be successful in a business like this is to be adaptable, very adaptable,” Crim said.

Crim said he has other business interests to keep him occupied after the shop closes in January. He restores cemetery stones.

“I restore pioneer cemeteries, old cemeteries, where all the stones are broken,” he said. “I like doing that. I take my dog with me. There’s no pressure and it’s pretty easy.”

Crim said he isn’t actively looking to open another antique mall but doesn’t rule it out.

“The reason behind that is to broaden the market,” he said, noting that if the business didn’t have the word “antique” in its name, it could draw more customers.

Also in 2010, he painted each interior wall a different color. He added a mural which spans the east side of the building. The business names in the mural are the names of Crim’s ancestors.

“It’s been tremendous for business,” Crim said. “I’m going to miss seeing it, but you know, that’s life.”

Hoffman doesn’t have plans for the mural but is working with local artists.