The City of Carmel is making preparations for a new interactive sculpture inspired by the late Hoosier composer Hoagy Carmichael. 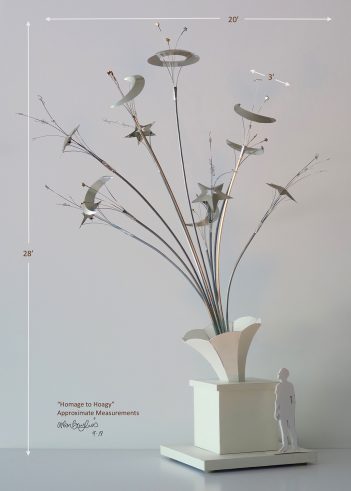 A scale model of the Homage to Hoagy Carmichael sculpture, which will be installed in the roundabout at City Center Drive and 3rd Ave. SW. (Submitted photo)

Homage to Hoagy Carmichael is expected to be installed in the spring in the roundabout at City Center Drive and 3rd Ave. SW across from the Palladium. The $435,167 sculpture is created by Arlon Bayliss, the Anderson-based artist who designed the Beacon Bloom sculpture in the roundabout at Westfield Boulevard and 96th Street. The city paid $352,900 for Beacon Bloom, which was installed in the fall of 2017.

Inspired by Carmichael classics such as “Stardust,” “In the Still of the Night” and “Skylark,” the 28-foot tall sculpture will feature celestial objects coming out of a gramophone. It will be complemented by two 4-foot tall kiosks on the south side of City Center Drive featuring smaller gramophones that will play Carmichael songs and provide information about the composer when its crank is turned.

“We want to inspire with the beautiful structure, but we also want to educate as much as we can,” said Dan McFeely, a spokesman for the City of Carmel.

Carmel Mayor Jim Brainard described Carmichael’s song, “Stardust,” as “one of the most beautiful songs ever.” First recorded in Richmond in 1927, artists such as Nat King Cole, Ella Fitzgerald and Frank Sinatra later recorded their own versions.

“In many ways it is Indiana’s anthem. It was written in Bloomington,” Brainard said. “This sculpture captures the feel of that song while paying homage to Hoagy Carmichael and his Indiana roots.”

Carmichael was born in Bloomington in 1899. He earned a bachelor’s degree from Indiana University in 1925 and a law degree in 1926. But it didn’t take long for him to being pursuing music full time, writing dozens of songs performed by some of the 20th century’s most iconic voices before his death in 1981.

“The sculpture will become, I believe, an iconic part of the Carmel landscape for generations and help tell the story of a talented and famous Hoosier,” Brainard said.

The city is also planning to install a $360,000 rose-themed sculpture by Bayliss in the roundabout at N. Pennsylvania and Old Meridian streets.