You are at:Home»Current in Carmel»Carmel Community»Golf course architect who helped design Brookshire remembered

Gary Kern and his son, Ron Kern, formed a strong bond over their love of golf, and it’s a legacy that will continue after Gary, 80, died Nov. 30.

A golf course architect whose career was launched by the development of the Brookshire neighborhood, Gary Kern inspired his son to pursue the same career, and the two worked together for several years. 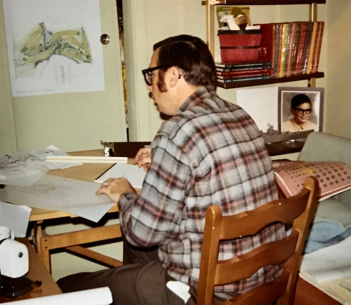 “My favorite memory (of my father) would be when I would step back and watch my dad working with the bulldozer operator shaping the golf course or with the construction guys actually making the formations, watching the artistry,” said Ron Kern, a lifelong Carmel resident. “My favorite memory is my dad taught me all that.”

Gary Kern grew up in Kendallville, Ind., and began playing golf as a student at Texas A&M University. After college he moved to Carmel and began his career in the Indiana Dept. of Highways before taking a job with Hamilton County-based civil engineering firm Wiehe Engineers.

In 1969 Wiehe Engineers began work on Carmel’s Brookshire neighborhood, which includes a golf course. Gary Kern suggested hiring golf course architect Bill Diddel to design the golf course and worked alongside him to make it a reality. Diddel, a Carmel resident who designed the original course at Woodland Country Club and many others in the Midwest, encouraged Gary Kern to pursue golf course architecture, and he designed his first course for Tomahawk Hills Golf Club in Jamestown.

During his career Gary Kern designed several golf courses near St. Louis, where he moved in 1983. He also designed a course for the New England Country Club in Bellingham, Mass.

Even though Gary Kern spent most of his later years in Missouri, Ron Kern said Carmel always had a special place in his heart.

“It was kind of the frontier (in Carmel), but it was an exciting place to be and a place he wanted to be,” Ron Kern said.

In lieu of flowers, memorial contributions may be made to the Lord of Life Church in Chesterfield, Mo., and The First Tee of Greater St. Louis.