You are at:Home»Current in Noblesville»Noblesville Community»Suspect in fatal stabbing of boyfriend changed story during police interviews

A Noblesville woman who is suspected of killing her boyfriend had her initial hearing last week in Hamilton County Magistrate Court.

Ladonna Roudebush, 47, is being charged with murder for stabbing James A. Blair, 46, Noblesville, on Nov. 27 at 721 Nelson Circle, Roudebush’s apartment. The apartment is part of the Northlake Village complex on Cumberland Road. 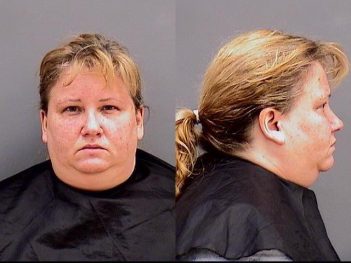 Roudebush took part in the Dec. 4 hearing via video conferencing from the Hamilton County Jail. Magistrate Judge Darren Murphy presided. Roudebush did not appear with an attorney at her side and said during the hearing she would need a court-appointed attorney. Murphy appointed Noblesville criminal litigation lawyer Andrew Dollard.

According to officials from the Hamilton County Coroner’s Office, who conducted the autopsy, Blair died from a stab wound to the back. A probable cause affidavit from the Noblesville Police Dept. stated Blair had a total of five wounds – four incised wounds on his left arm and the stab wound to his back, which caused him to aspirate.

The Noblesville Police Dept. probable cause affidavit said Blair and Roudebush were in a dating relationship, but that Roudebush had recently found out Blair was married.

According to the affidavit, in her first interview with police just after the incident, Roudebush said she went to the bathroom, and while there, she heard Blair screaming for help from the common-area hallway in her apartment building, and she called 911. The affidavit says officers found Roudebush intoxicated upon their arrival, in addition to a path of blood from the hallway to Roudebush’s apartment.

After a search warrant was obtained, police said they found a trail of blood from the bedroom at the back of the apartment to the front door and out into the hallway. Evidence technicians later found a knife in Roudebush’s purse in the kitchen, along with 12 empty beer bottles.

In another interview, police said Roudebush she changed her account of the evening, stating that she was woken up in her bedroom by the sound of Blair yelling for help and that she followed him out the front door of the apartment, aiding him by trying to stop bleeding from his back with her hands. In this interview, when asked if she stabbed Blair, she said she didn’t know, and, according to the affidavit, when she was confronted with the changes in her account of the evening, she said she could not remember.

Three days after the murder, Nov. 30, detectives began reviewing phone records, showing Roudebush knew the victim was married and that she intended to harm Blair’s wife. Text messages also were found regarding Roudebush’s creation of a Facebook account under the name of Kay Stevens. In a Nov. 30 interview with police, Roudebush said she created the account to be able to contact Blair’s wife. In the same interview, Roudebush said she and Blair were fighting in the master bedroom, where she was packing his personal belongings to kick him out of the apartment.

“Roudebush stated that she (didn’t) remember the entirety of the evening,” the affadavid reads. “But Roudebush did recall that she saw the victim laying on the floor bleeding and asked the victim who stabbed him, and the victim responded ‘you did.’”

According to his obituary, Blair was survived by three children, two grandchildren and his wife. His funeral was Dec. 5 in DeMotte, Ind. Officials from the Hamilton County Coroner’s Office told Current in Noblesville Blair had recently moved to Noblesville from Hobart, Ind.

Roudebush’s pretrial hearing is set for 1:20 p.m. Feb. 14 in Superior Court 2 at the Hamilton County Government and Judicial Center in Noblesville. A jury trial is set for 9 a.m. March 12. Her initial bond was set at $1 million, but Murphy decided at the Dec. 4 hearing Roudebush should be held without bond. She remains incarcerated at the Hamilton County Jail in Noblesville.