You are at:Home»Current in Zionsville»Zionsville Community»CruZionsville ends after 8 years of success

CruZionsville, a fundraiser presented by the Central Indiana Region of the Porsche Club of America, ended this year after an eight-year run. Its founders, Steve and Alice Tarr, moved to Florida in September. 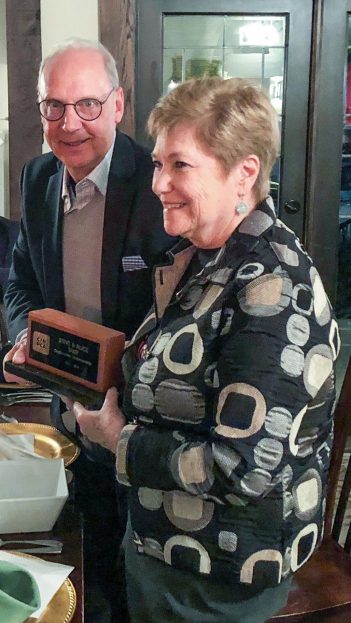 Steve and Alice Tarr receive an award Nov. 9 from the Indiana Region of Porsche Club of America for chairing the CruZionsville Alzheimer’s Event for eight successful years since its 2010 launch. (Submitted photos)

The June 2 event celebrated the 70th anniversary of Porsche with a police-escorted drive into downtown Zionsville, where the cars were displayed on the brick street. The purpose of the family friendly festival was to raise funds and awareness about Alzheimer’s care, support and research. More than 100 Porsches participated in the June 2 parade and show, making CruZionsville the largest Porsche show in Indiana.

“Since 2010, CruZionsville (was) a very generous supporter of the Alzheimer’s Association Greater Indiana Chapter,” Chapter Executive Natalie Sutton said. “There are at least 5 million Americans living with Alzheimer’s disease and other dementias, including 110,000 Hoosiers. The funds raised by CruZionsville helps Hoosiers and their caregivers facing the disease.”

The cars were judged by professional and amateur judges. Winners were presented awards in various categories. Car owners paid an entry fee to participate. The event raised more than $21,000 for the Alzheimer’s Association, bringing the eight-year total to more than $126,000.

During a Nov. 9 dinner celebration, Steve and Alice Tarr received an award from the Indiana Region of Porsche Club of America chairing the event during its eight-year run.