Cook recently drafted a hate crime bill, which will go before lawmakers during the 2019 legislative session. Indiana is one of only five states without a hate crime bill. Cook said he recently saw a report revealing that 78 bias-based crimes were committed last year in Indiana. 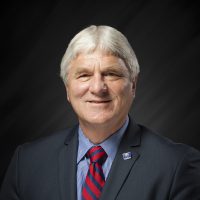 “With the national things we’ve seen with violence and bias and hatred and the Indiana incidents we’ve had, I think it’s just time to send a strong message that we are not tolerant of those kinds of behaviors and motivations of targeting people because of who they are or what color they are,” he said. “That is not what Hoosiers are all about.”

For Cook, it’s personal. He witnessed hate when he was Ryan White’s principal in the Hamilton Heights School Corp. in 1987. White, a hemophiliac who was diagnosed with AIDS as a young boy after a blood transfusion, was from Kokomo. He was ridiculed and bullied by classmates at Western Middle School in Russiaville. The White family left Kokomo and moved to Cicero, where White then attended Hamilton Heights High School.

White, whose story drew international attention, died of AIDS in 1990.

“For me, I saw some of that ugly side during the Ryan White time period when I was his principal and admitted him to school with no restrictions,” Cook said. “People would say some hateful things and send hateful letters. For me, it’s kind of a personal thing.”

If Cook’s bill passes, it would allow judges to increase criminal sentencing if a perpetrator commits a crime due to bias against the victim’s characteristics, including age, race, religion, ethnicity, national origin, ancestry, color, gender, gender identity, sexual orientation, disability, status as a police officer or service in the U.S. Armed Forces.

Judges currently have the option to increase sentences but typically don’t because of concerns sentences could be shortened on appeal.

“This is to provide clarity and to lineate,” Cook said of the proposed bill.

The bill does not outline sentence lengths. Cook said the decision should be up to judges. The proposed bill simply states judges are allowed to pronounce longer sentences for individuals convicted of hate crimes.

“I left it up to the judge’s discernment. It just clearly lets him apply (longer sentences) in those areas where you can truly prove (victims) were targeted because of (bias),” Cook said.

Besides allowing for longer sentences, the proposed bill requires law enforcement to report hate crimes to the FBI and Indiana’s central repository for criminal history information at least twice a year to identify trends. Law enforcement also will receive training on identifying and responding to hate crimes.

Cook said the bill won’t inhibit free speech, although he said he’s received feedback from Indiana residents who worry that could be the case.

“You can be as hateful as you want and still think that, but carrying it out in a physical manner on individuals and property, that’s where you cross the line. That’s where we need to send the message,” he said.

Cook is the state representative for Indiana House District 32, which includes all of Tipton County and portions of Hamilton, Madison, Delaware, Howard and Grant counties The other four states without hate crime legislation are Arkansas, South Carolina, Georgia and Wyoming.