You are at:Home»Current in Noblesville»Noblesville Community»Noblesville stabbing, murder suspect set to appear in court today

The victim of a Nov. 27 fatal stabbing in Noblesville has been identified.

According to officials from the Hamilton County Coroner’s Office, who conducted the autopsy, James A. Blair, 46, died from a stab wound to the back. His death is being ruled as a homicide. 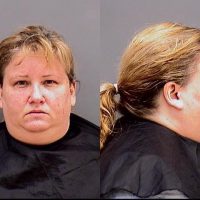 According to the police, Blair had just moved to the apartment at 721 Nelson Circle, Noblesville, where the stabbing took place. The apartment is in the Northlake Village complex on Cumberland Road, across the street from Noblesville High School. Police said Blair formerly was living in Hobart, Ind.

Ladonna K. Roudebush, 47, Noblesville, is being charged for the murder. At approximately 10:54 p.m. Nov. 27, Noblesville Police Dept. officers were called to the apartment on the report of a stabbing. Police found Blair when they arrived on the scene, giving first aid and later transporting Blair to Riverview Health, where he was later pronounced dead.

Roudebush is set to appear in court at 1:30 p.m. today, Dec. 4, in Hamilton County Magistrate Court in Noblesville.