You are at:Home»Current in Noblesville»Noblesville Cover Stories»Lights Over Seminary: Downtown groups partner to bring back, display pieces of Noblesville’s history

Aaron Head is in a unique position. Representing the City of Noblesville as an economic development specialist and as a board member and city liaison for the Noblesville Preservation Alliance, he’s been a strong influence in starting a new Noblesville tradition that will kick off this weekend downtown.

Lights Over Seminary, and interactive, walkable and historic light display, will open Dec. 7 at Seminary Park, 200 S. 10th St. The display will feature numerous light displays that were used by the city decades ago. 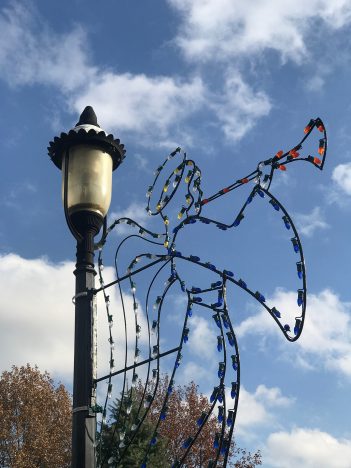 Some pieces in the Lights Over Seminary display will be recognizable to longtime Noblesville residents as the Noblesville Preservation Alliance has incorporated multiple vintage pieces from city displays from the 1950s and ’60s.

Head said the pieces, which include items like frames of angels, carosel horses and more, were in storage at Riverview Hospital. He said the hospital needed the space and asked the city if it wanted the pieces. If not, they would be thrown away.

“I went over to take a look and see what was there,” Head said. “I had to figure out if there was anything of value, what we could do with it. There was no real plan in place at this time. I just loaded it all into the back of my truck and didn’t know what I was going to do with it.”

Head said he informed the NPA of the situation and members were quick to respond. They stored the pieces in their basements and garages until a plan for the vintage pieces was formed.

“About that time, I started talking with (Noblesville Parks Director) Brandon Bennett and asked him if he felt like some of these display pieces could be reutilized in a park somewhere in Noblesville,” Head said. “We kind of came up with the idea that now that (the city is) going to look at some upgrades to Seminary Park, could we start doing a holiday display there as a gateway to our downtown? He was all about it, and we had a plan.”

Between the parks department and the NPA, a plan was made to refurbish the items, such as replacing old bulbs with energy-efficient LED bulbs. To offset costs, Head applied for a quick-impact/placemaking grant through the Office of Community and Rural Affairs.

“It’s a grant of up to $5,000 for some quick-impact things,” he said. “People have used it for some little quick (projects) like in alleys or doing other things in their downtowns. I reached out to them and asked them if it was something they would deem eligible for this grant because at this point, we still didn’t have any real funding to do anything. We ended up getting the full $5,000 grant, so with that, we sort of had this nest egg of money to help pay for the refurbishment of the vintage pieces, and additionally, to purchase new display items and, on top of that, we had some funding left over to do some signage and other stuff in the display.”

“With them, we wanted this to be featured as part of their December First Friday event,” Head said. “We felt that doing that could sort of cross downtown events that are happening all at the same time.”

Numerous downtown events will be happening the evening of Dec. 7, including Main Street’s Midnight Madness shopping event; hot chocolate at the Santa House on the south side of the square; skating at the ice rink; and Christmas Cottage at Federal Hill Commons and Nickel Plate Arts’ First Friday open house and “Gifted” exhibit and holiday shop.

For Lights Over Seminary, the ceremonial lighting – overseen by Noblesville Mayor John Ditslear will – will take place Dec. 7 at 6 p.m.

“The unique side of it is that we’re presenting it as more of a walkable Christmas lights display,” Head said. “You can still drive by and see it, but what we would love to do is get people into the park to sort of do some winter-time programming there that doesn’t require (parks or city staff) to be there.”

The public is invited to the park about 15 minutes before the official lighting. A trolley will be in service through the evening stopping at Federal Hill Commons, Nickel Plate Arts, the Hamilton County Artists’ Association’s Birdie Gallery and Seminary Park and spots on the square.

Lights Over Seminary will be on display through Jan. 4. For more, visit noblesvillepreservation.com. 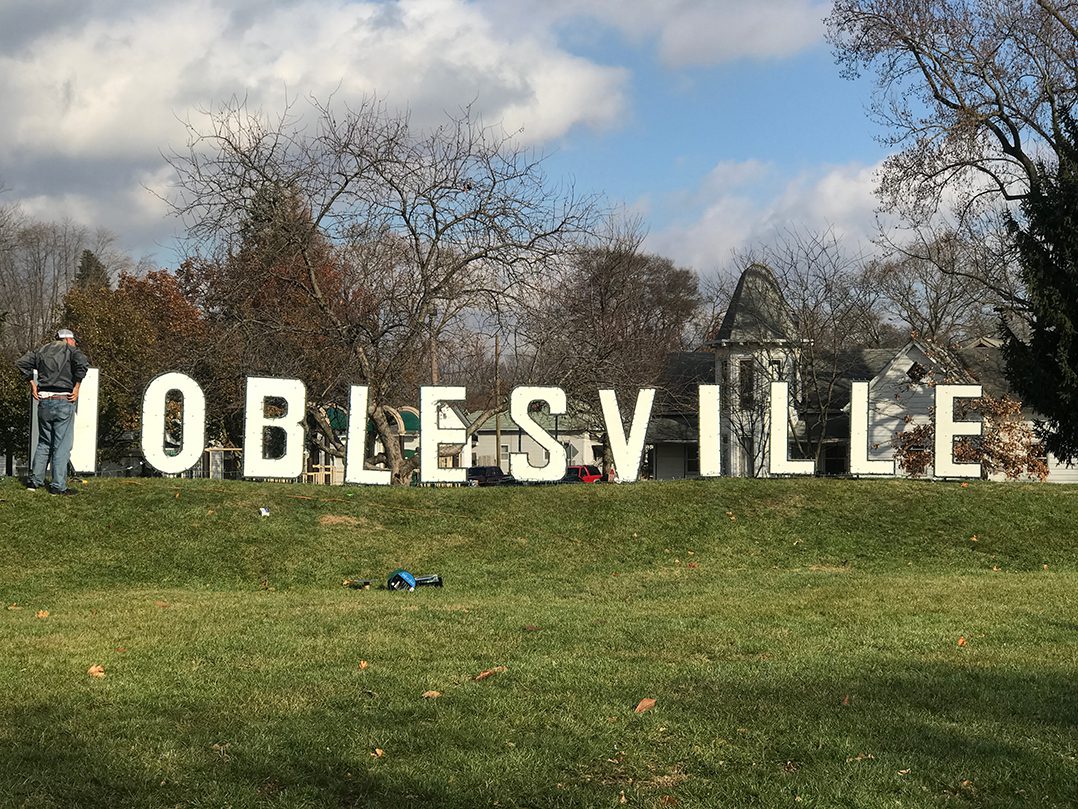 Noblesville’s version of the famous Hollywood sign sits on top of the hill at Seminary Park. (Photos by Sadie Hunter)

Along with the vintage display, the Noblesville Preservation Alliance and Nickel Plate Arts have worked during the past several weeks to gather local artists to create light sculptures that showcase the city’s history and heritage in the form of a lighted sculpture contest Entries will be displayed at Lights Over Seminary. 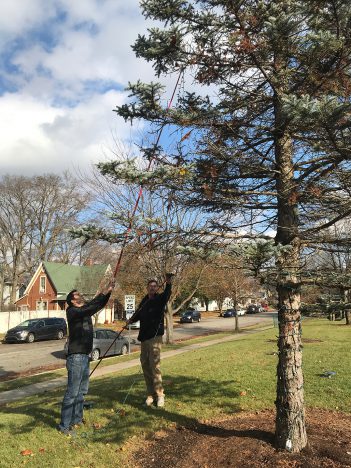 Aaron Head and Benji Lewis hang lights in the trees prior to the official Lights Over Seminary lighting.

“Instead of a candy cane or something, artists could do a star-brick pattern (the city’s brick street and sidewalk pattern seen throughout downtown) or a silhouette of the top of the courthouse, some of those things,” Head said. “That’s really the preservation alliance’s goal here is to be talking about our history. We really wanted to try to feature something in the arts world because of our really great cultural arts district that we have. We felt like if we could implement the arts in this, we could speak to a wider audience as well. We’re calling it sort of an intersection of history, art and holiday cheer.”

Head said all the display pieces in the contest will pay homage to a historical element of the city.

“Each year that we do this, we’ll continue to expand it,” he said. “More artists will put pieces in, and then our collection of Christmas display items will grow each year. The overall display will become more robust as we go along.”