You are at:Home»Current in Noblesville»Noblesville Community»Seaman receives Sagamore of the Wabash

Noblesville West Middle School teacher Jason Seaman has been honored with the Sagamore of the Wabash award by Indiana Gov. Eric Holcomb.

Seaman has been recognized for his quick action on May 25 when a seventh-grade student shot him and another student, Ella Whistler, in his science classroom at NWMS. 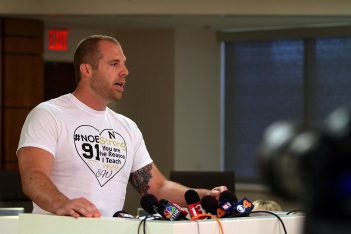 When the shooting began, Seaman tackled the shooter and disarmed him. The shooter has since been sentenced to the juvenile department of corrections.

Sagamore of the Wabash awards were long considered the highest honor Indiana’s governor could give until Gov. Mitch Daniels created the Sachem Award in 2006, the state’s highest honor. The award also often is given with other gifts, though those items are not usually publicized, along with a lapel pin.

The honor was established in the 1940s during the term of Gov. Ralph Gates. Holcomb has received the award twice.