For Devan Mathias, the stage production of “Mary Poppins” is the perfect combination of the book and the movie about the magical nanny.

“In the book, she is a lot more stern with the children and has a wicked sense of humor,” Mathias said. “This production marries those well.”

Mathias, a Fishers resident who helps direct Hamilton Southeastern High School shows with her husband, Ethan, played the title role in Civic Theatre’s 2015 of “Mary Poppins.” Indianapolis resident Jeremy Shivers-Brimm returns as Bert in Civic Theatre’s production of “Mary Poppins,” which runs from Dec. 7 to Dec. 29 at The Tarkington at the Center for the Performing Arts in Carmel. 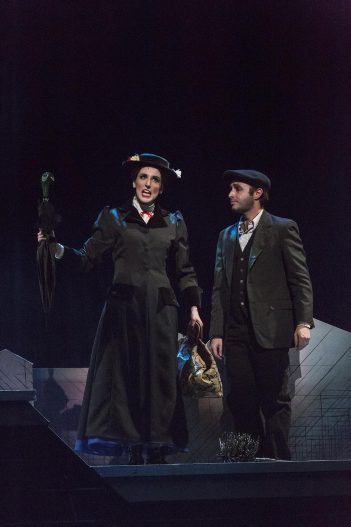 “I really wanted to do this show because it meant a lot to me the first time,” said Mathias, who again plays the title role. “I just want to breathe new life into ‘Mary Poppins.’ It’s such a great role. There are so many great things. You get to fall in love with the family and it breaks your heart when you leave them. There’s so much comedy. It’s vocally challenging. ‘Mary Poppins’ is all about the non-verbal cues. She’s quite the cheeky character, so it’s all in the wink of an eye or a nod or a chortle.”

Shivers-Brimm enjoys playing the role of Bert as a lovable rascal.

“In director Anne Beck’s vision, he is a guardian angel for the kids,” Shivers-Brimm said. “In working with Devan last time, we developed a nice relationship that isn’t romantic and isn’t a friendship, it’s just a magical relationship between the two characters. I just like to find that three years later in a different way. I think (Mary and Bert) have so much respect and care for each other and they’re kind of partners-in-crime in teaching lessons in people that need the help the most.”

“It’s fun to play bratty people,” Pinchouck said. “They’re very different from the ones in the movie. The choreography is harder than some other stuff I’ve had to do. Then memorizing lines. This is the biggest role I’ve played in a real theater.”

“I think it’s cool to be bratty, honestly,” Kistner said.

The biggest challenge Kistner said are “lines and blocking because it’s a really long show.”

Kistner, who previously performed in “James and the Giant Peach” at Jr. Civic, started acting at age 9. He also has performed in Christian Youth Theater and one school production.

“I think it’s cool to play different parts and be a versatile actor in front of other people,” he said.

“I get to scare (Ben) and come to life, which will be very fun,” Jennie said. “It’s fun to be on stage with him and not be his mom, just be a member of the cast with him. It’s been a good bonding experience for the two of us. It’s been great to see him get such great direction, especially in a show with mostly all adults. He’s mostly acted with all kids. It’s nice to sit back and not worry about him. He’s getting good direction and he’s having a great time.”

“When he’s not in theater, we’re trying to pry him away from the piano,” she said.

“It’s a great role in the sense that it tells the story of families,” Koharchik said. “For adults, it’s a good reminder that kids need our attention and to focus on what really matters in a family.”